AFP – Forget serious and subdued nails. The trend now is to embrace colour and sparkle, as seen on Instagram.

Hailey Bieber recently got the web buzzing by showing off her subtly shimmery chrome-effect manicure on the social media platform. Here, nails are part-way between white and nude, and lacquered in a way that’s reminiscent of the glaze of a donut, hence the trend’s name: “glazed donut” nails.

Her nail artist Zola Ganzorigt (@nailsbyzola) even offered instructions on how to reproduce the manicure at home.

It involves using two coats of white nail polish, then a transparent top coat. Next, after removing any residual oil from nails, apply OPI Chrome Effects Powder in the shade Tin Man Can with a foam applicator, before finishing with a final layer of topcoat.

It’s an easy and affordable trend that’s going down a storm on social networks. The #glazeddonutnails hashtag already has over nine million views on TikTok. 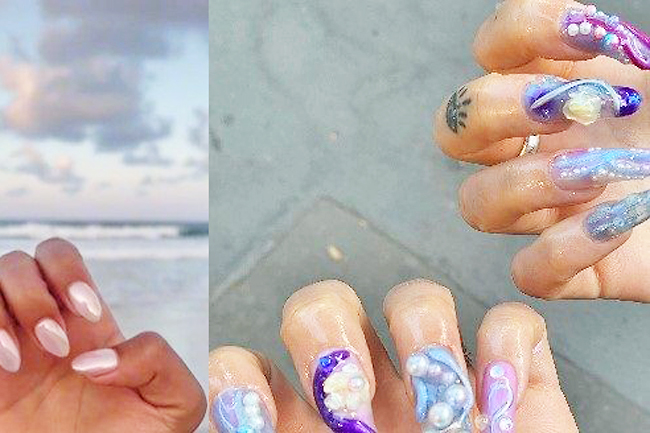 This season, anything goes. So it’s time to reach for neon oranges, blues and greens, and mix them all up with wild designs.

Psychedelic nails are out in force, with patterns straight from the 1970s.

A host of tutorials on TikTok explain how to combine colours to create trendy nail art.
It may not have escaped your attention that the 2000s, and kitsch and colourful patterns, are making a comeback. Not too far removed from the Barbiecore trend, nail art is going 3D.

Multicoloured nail jewels are all the rage.

From hearts to pearls, beads and bows… everything goes – and the more, the better.

To maximise the effect, nails are often worn very long. These eccentric manicures are perfect for the vacation season, when you have little else to do but bask in the sun.

For less daring fans still in search of a 3D effect, “water drop” nail art could be just the thing. This involves applying some transparent top coat in drops onto your nails to create a wet effect, as if you just hopped out of the pool.