From ambitions to facts

AL RAYYAN, QATAR (AP) – At a suburban park near Doha, the capital city of Qatar, cool air from vents in the ground blasted joggers on a November day that reached almost 32 degrees Celsius.

The small park with air-conditioned paths is an apt illustration of World Cup host Qatar’s answers, so far, to the rising temperatures its people face. The wealthy Gulf Arab nation has been able to pay for extreme adaptive measures like this thanks to the natural gas it exports to the world.

A small peninsula that juts out into the Persian Gulf, Qatar sits in a region that, outside the Arctic, is warming faster than any place else on earth.

“It’s already bad. And it’s getting worse,” said Germany’s Max Planck Institute atmospheric chemist Jos Lelieveld. Part of the reason is the warming waters of the Persian Gulf, a shallow, narrow sea that contributes to stifling humidity in Qatar during some months.

Already, Qatar has faced a significant rise in temperatures compared to pre-industrial times. 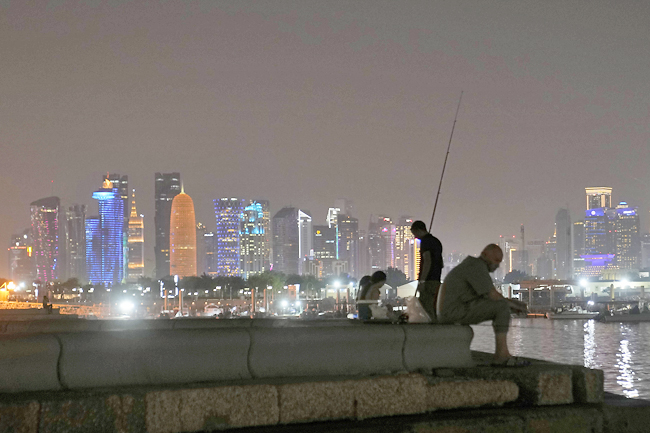 Scientists and others concerned about climate change are trying to keep the Earth as a whole from warming by more than two degrees Celsius on average because research shows it will be profoundly disruptive, making many people homeless, inundating coastlines and destroying ecosystems.

It is one of the world’s hottest countries and will experience even more heat extremes, floods, droughts and sand and dust storms.

If Qatar is one of the world’s wealthiest nations per capita, it is also one of the most polluting per person.

Around this country slightly smaller than the United States’ Connecticut, large SUVs are a common sight, filled with cheap gasoline. Air-conditioning blasts the insides of buildings year-round.

Even the country’s drinking water is energy intensive, with nearly all of it coming from desalination plants that burn fossil fuel for the force needed to press ocean water through tiny filters to make it consumable.

At the 2015 Paris climate talks, it did not commit to reducing emissions, but set a goal six years later to cut emissions 25 per cent by 2030.

One way would be to use carbon capture and storage at gas production facilities, a much-discussed technology that has yet to be deployed at scale.

Recently, the country also connected a solar power plant to its electric grid that could power 10 per cent of the nation’s energy needs at full capacity.

In Doha, there is a new metro system, more green spaces and parks, and the upscale Msheireb district which was designed to take advantage of natural wind flows.

The Ministry of Environment and Climate Change did not respond to multiple requests from The Associated Press for comment on its emissions reduction plan.

In the past, it has said that one key effort will be to diversify Qatar’s economy.

But to hold the event, Qatar built enormous amounts of infrastructure over a 12-year period – with a massive carbon footprint, despite its claims otherwise.

“They can’t diversify without spending money,” said Elgendy. “And that money will come from oil and gas. It’s a bit of a conundrum.”

Qatari officials and some academics argue that exporting liquefied natural gas (LNG) to the world can help the transition to clean energy because the fossil fuel is less polluting than oil and coal.

That view is increasingly unsupported by science as the extent of leaks from natural gas infrastructure becomes clear. Leaking natural gas is far more harmful for the climate than carbon dioxide, tonne for tonne.

Earlier this year, state-owned gas giant Qatar Energy joined an industry-led pledge to reduce nearly all methane emissions from operations by 2030. Methane is the principal constituent of natural gas.

But a real turn away from fossil fuels has yet to begin here.

After the situation in Ukraine, Europe’s race to replace gas from that country left Qatar – among the world’s top natural gas producers and exporters – in pole position to benefit.

Qatar inked new deals with several energy companies, including a recent 27-year agreement to provide LNG to Chinese oil and gas company Sinopec. “Since the situation in Ukraine, everyone is talking to the Qataris now to see if they can get that gas,” Elgendy said.