Bardella, who was widely expected to win as Le Pen’s protege, is the first person outside the Le Pen family to lead the RN in its 50-year history.

Questions remain over what value the RN presidency has for him, given that Le Pen formally leads its cohort in Parliament and is widely expected to again be its presidential candidate in 2027.

“I am not stepping down so I can go on vacation,” Le Pen told the party conference in Paris.

Bardella obtained 85 per cent of the votes from around 26,000 party members, beating Louis Aliot, a party veteran and mayor of the southern city of Perpignan, who garnered 15 per cent. His nomination comes on the heels of the party’s best-ever showing in parliamentary elections earlier this year, when it won 89 seats even after Le Pen failed to unseat Emmanuel Macron in her third run for the presidency.

“We are patriots, who know that France needs a wake-up call,” Bardella said after his election, vowing to help the country “heal its divisions”.

He reiterated the party’s promise to crack down on immigration, not least by restricting welfare benefits to French citizens, while also tackling inflation and growing concerns “about being able to make it to the end of the month”.

Bardella has embraced Le Pen’s efforts to shed the virulent anti-Semitic and extremist views fomented by her father, party founder Jean-Marie Le Pen, who was excluded in 2015. 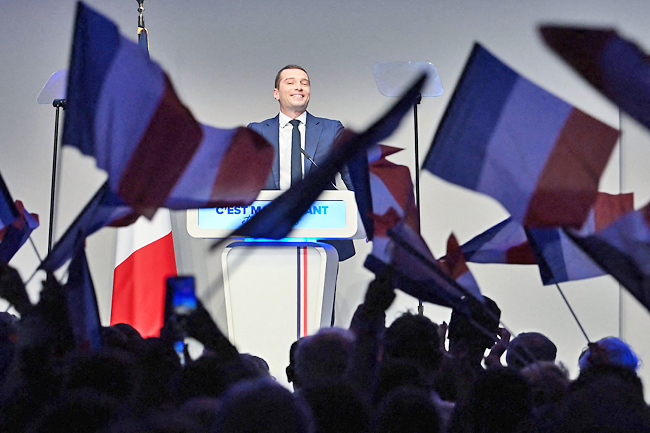