Felix Dorfin, 35, was handed a capital sentence after his arrest last year at the airport in Lombok, a holiday island next to Bali, but his execution was commuted to 19 years in prison in August.

Dorfin was carrying a suitcase filled with about three kilogrammes of drugs including ecstasy and amphetamines when he was seized, but maintained he had no knowledge of the narcotics in his luggage.

The Frenchman made headlines in January when he escaped from a police detention centre in Lombok and spent nearly two weeks on the run before he was recaptured.

A female police officer was arrested for allegedly helping him escape in exchange for money. Yesterday, Dorfin’s jailers in Lombok said they had discovered that the drug trafficker tried to dig out a hole in the wall of his prison cell using metal from an old sewer drain. “It was still too small for him to get through it,” said Tri Saptono Sambudji, head of the prison in Mataram city.

“Now he has been placed in an isolation cell because he is considered a high-risk inmate.”

Dorfin had already been scheduled to be transferred to high-security Nusakambangan prison island off Java, where most death-by-firing-squad executions take place and which has been a penal colony since Indonesia’s then Dutch rulers began detaining prisoners there more than a century ago.

But now, after the escape plan, he would be placed on an even stricter security status once moved to the remote island, Sambudji said. Indonesia has some of the world’s toughest drug laws including the death penalty for traffickers.

In 2015, Australians Andrew Chan and Myuran Sukumaran – the accused ringleaders of the so-called Bali Nine heroin gang – were executed by firing squad on Nusakambangan island. Many of Indonesia’s most notorious murderers and militants have also been sent to the island. 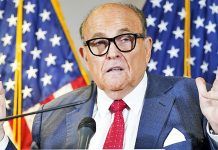