What happened next shocked her: Middleton, whom she had never met before, put the key to the Oldsmobile in her hand. He didn’t charge her a dime. He just gave her the car, no strings attached.

She is one of 33 people Middleton has gifted with a car in the past nine months.

Middleton, 38, is a restaurant owner and former auto mechanic who spends his spare time repairing used cars and giving them to people in need in rural South Carolina.

“There’s a lack of transportation in the rural areas, and I knew I could use my previous experience in mechanics to help,” Middleton said.

Only a few weeks before Middleton dropped off the car, Lee’s 33-year-old son, who had been ill for several years, died. 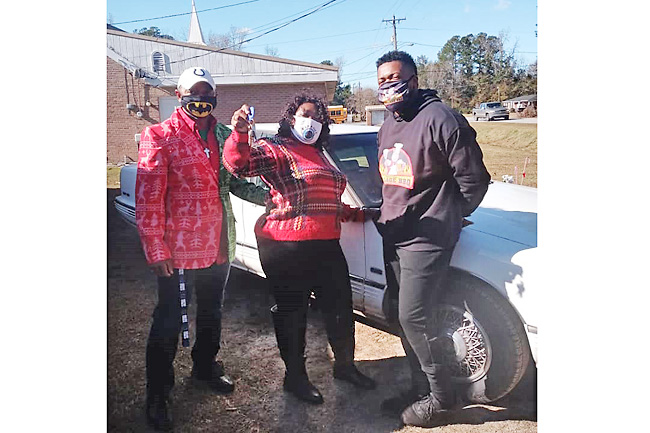 Her 2007 Chevrolet Tahoe had broken down after driving daily for two hours to and from the hospital in Charleston to visit him.

She took the car to a shop to replace the transmission, but “I had no means of paying for it”, she said.

She needed a car to help with child care for her two granddaughters, who are 12 and six and rely on her to pick them up from school every day and drive them to dance rehearsal.

“This car meant everything to me,” Lee said about her refurbished Oldsmobile. “It was so needed.”

The idea to fix and donate old vehicles came spontaneously to Middleton in early 2020, after he hosted a food drive and several local families, who had no transportation, walked more than four miles to get a hot meal.

In a Facebook post, he asked for junk cars from the local community. He later pledged to trade slabs of his specialty, barbecued ribs, in exchange for broken-down vehicles.

Since transportation is a big issue in the area, he said, cars are often the only reliable way to get to work, shopping centres and doctors’ appointments.

“There’s no public transportation in the area whatsoever,” said Middleton, who lives in McClellanville, a small fishing town on the Atlantic coast with a population of about 600. “We don’t have taxis and Ubers. Without a car, people don’t have a way to get around.”

So Middleton – who co-owns Middleton; Maker Village BBQ, a restaurant in the neighbouring town of Awendaw – decided to put his auto mechanic skills to use the two days a week he isn’t at the restaurant.

So far, nearly 100 vehicles have been donated for him to fix up.

On any given day, at least 20 clunkers are in Middleton’s yard, which he has transformed into a makeshift auto shop.

While some cars need only simple fixes like new tyres or an oil change, others require a complete overhaul. Middleton harvests vehicles in really bad shape for parts.

Before jumping into the restaurant industry, Middleton worked as an auto mechanic for 15 years. As a boy in McClellanville, his plan was to follow in his father’s footsteps.

“My dad was a mechanic, and I would hang out around his shop since I was four years old,” Middleton said. “I’ve always been fascinated by cars.”

After he graduated from high school, Middleton trained to become an auto mechanic, and in 2004, he and his father opened their own auto service together. It was then, he said, that he first realised the dire need for transportation support in rural communities.

“We had a lot of single moms as customers, and we always ran into problems with them not having enough funds,” Middleton recalled.

“We spoke about trying to find a way to help them, but we never had the chance to sit down and figure something out.” Whenever they started to brainstorm ideas, something got in the way.

Middleton’s father’s health began to decline, and in 2014, they closed the shop.

Barbecuing has always been a side passion for Middleton, he said, so he decided to change course and pursue it professionally.

Still, despite leaving the auto industry, the notion of repairing used vehicles for people in need remained a shared goal for Middleton and his father.

But after receiving the first donated car in January 2020, several things in their lives took priority, including Middleton’s father’s failing health – he died in March 2020.

Around the same time, Middleton opened a restaurant, just as the coronavirus pandemic was taking hold.

“Things started changing in my life, and I couldn’t focus on the car programme the way I wanted to,” said Middleton, who has two daughters, ages 14 and eight.

By September 2020, though, Middleton felt ready, with fresh motivation to honour his father’s legacy. He repaired the first car – a 1997 navy Toyota Camry – and gave it to an unemployed single mother of two children, one of whom is disabled and requires regular
medical appointments.

“She was astonished about the car being hers and she was crying,” said Middleton, adding he heard about the woman’s financial challenges through a mutual friend on Facebook and offered to surprise her with the car.

“That felt great. I could feel my dad’s presence around me, and I could hear him saying ‘This is exactly what we always wanted to do.’”

Within two months, the same woman was able to land a stable job, and she recently contacted Middleton to say she bought herself a new car and is donating the one he gave her back to him.

“That blew me away,” Middleton said. The car programme continued to gain momentum, and Middleton, who initially funded the repairs out of pocket, decided to start a nonprofit called Middleton’s Village to Village to bolster the effort.

Through word of mouth, requests to donate used cars started pouring in, including from Alice Blake, who offered up her red 2002 Oldsmobile Bravada.

“I know how well the car served me, and I’m hoping it can do the same for someone else,” said Blake, 57.

She considered restoring the vehicle and keeping it for herself, but when she heard about Middleton’s initiative, she decided to donate it and buy a new car.

“I don’t even have words to express how happy it made me feel,” she said.

Middleton’s waitlist of people needing cars grows by the day. While some people contact him directly explaining their need for a vehicle, others ask to surprise friends or family members with a car.

“It’s moving so fast it’s just incredible,” Middleton said. “There is no free time between the restaurant and the programme, but I don’t get tired. Something just keeps pushing me to do more.”

The generosity of donors coupled with the elated reactions from recipients, he said, energises him.

Mike Jennings, 31, was completely floored when Middleton showed up at his home in Hanahan with a refurbished 2000 Subaru Forester.

“I knew he did it for people, but I never thought I’d be getting one,” said Jennings, who is also an auto mechanic and regularly volunteers to fix cars with Middleton.

Jennings’s own car died, and his fiancee was furloughed during the pandemic. Thanks to Middleton, “I was able to keep paying the bills and keep a roof over my family’s head,” he said.

Local officials said the car programme has had an effect on their small towns, and in October, Middleton won a Jefferson Award, a national honour that recognises Americans who exhibit exceptional public service.

“People think Eliot is an angel, and I do, too,” Andrews Mayor Frank McClary said. “You’d think he has a team behind him, but it’s just him and it blows me away.

“Somehow, someway, he is finding the energy to be a great father and a great community leader, and it’s absolutely mind-boggling to see what he can do,” McClary said.

Middleton said the support from the rural South Carolina community has made the programme possible.

“It’s been a real team effort,” he said, adding that people have also dropped off food and volunteered to help with repairs.

“I can’t express how much the support means to me.”

The car programme, Middleton said, has changed the lives of many people – including his own.

“It has been a wonderful, life-altering experience, and we’re just getting started,” he said.