THE WASHINGTON POST – Jonathan Franzen’s new novel, Crossroads is the first of a planned trilogy modestly called A Key to All Mythologies.

With its dazzling style and tireless attention to the machinations of a single family, Crossroads is distinctly Franzenesque, but it represents a marked evolution, a new level of discipline and even a deeper sense of mercy.

And the gaping jaw of his earlier novels, capable of swallowing a vast body of cultural trends and commercial ills, has been replaced by a laser-eyed focus on the flutterings of the soul.

Before now, ‘soul’ is not a term I would have associated with Franzen, whose brilliant, acerbic work has seemed committed to a purely material concept of human identity.

But Crossroads feels consumed with the question, “Why art thou cast down, O my soul? and why art thou disquieted within me?”

The story revolves around Russ Hildebrandt, an associate pastor at an active Protestant church in suburban Chicago.

When the novel opens, 47-year-old Russ is still smarting from the brutal cancellation of his work with a youth group called Crossroads. 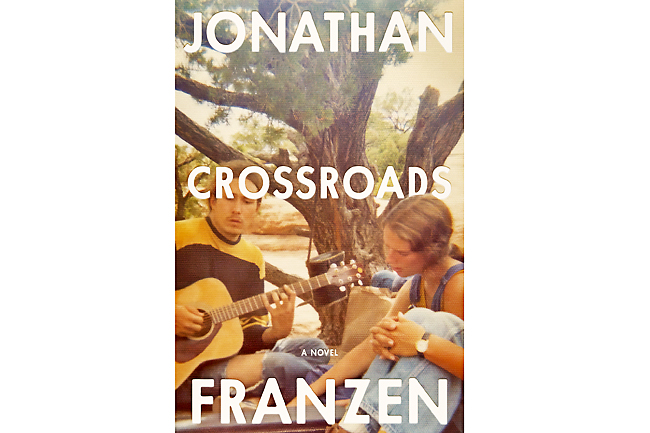 Three years earlier, bell-bottomed teenagers, led by a few particularly outspoken girls, insisted that Russ stop attending and leave management of the group to a younger, hipper pastor named Rick Ambrose. Since that night, Russ has stored up such enmity against Ambrose that it shapes everything about his job, even how he walks through the church to avoid passing the man’s office.

Everyone else moved on from that ecclesiastical kerfuffle, but the disgrace has shattered the minister’s confidence and turned him against his long-suffering wife, Marion.

Now, in the perverse logic of Russ’ wounded ego, he considers Marion “inseparable from an identity that had proved to be humiliating”. Salvation, he imagines, will be found by casting her off and falling into the arms of a recently widowed parishioner who is “gut-punchingly, faith-testingly, androgynously adorable”.

Hatred and humiliation – and their skewering effects on human behaviour – are not new concerns for Franzen’s fiction, but here he concentrates explicitly on the spiritual costs.

Initially, it’s hard to take the novel’s spiritual concerns seriously. Given his reputation for piercing characters on the mandibles of his superior intellect, a praying Franzen doesn’t feel much more sanctified than a praying mantis.

But Crossroads quickly demonstrates that it isn’t – or isn’t just – a satire of suburban church culture or the hypocrisies of religious faith. It’s an electrifying examination of the irreducible complexities of an ethical life.

With his ever-parsing style and his relentless calculation of the fractals of consciousness, Franzen makes a good claim to being the 21st Century’s Nathaniel Hawthorne.

Russ may want to believe that “in Him we live, and move, and have our being,” but he typically resides in a fog of “daily shame.” In fact, the pages of Crossroads are pockmarked with the words “shame” and “ashamed”; the members of Russ’ family are deep-fat fried
in shame.

The chapters rotate through these characters, testing each one’s struggle “to be good” while engaged in a battle of ceaseless strategising for advantage in their transactional relationships.

Among these characters is Russ and Marion’s only daughter, 18-year-old Becky, who has fallen in love for the first time, even as her parents’ marriage collapses.

It’s in such perfectly drawn portraits that Franzen’s attention to the origami of moral reasoning takes flight. Becky is purposely not a member of her father’s church, and regards
him sceptically. “His earnest faith and sanctity were an odour that had forever threatened to adhere to her,” Franzen wrote, “like the smell of Chesterfields, only worse, because it couldn’t be washed off”.

But the object of Becky’s affection is a handsome musician, and suddenly she realises that “if she opened herself to the possibility of belief she might gain an unforeseen advantage”.

How that belief eventually calcifies in her mind is a harrowing tale.

But her younger brother, Perry, whom she considers “an amoral brainiac”, is the real catastrophe of the novel. Ridiculously precocious and cripplingly self-conscious, he’s contending with depression and addiction largely outside the attention of his parents, who are too baffled by their own crossroads. His faltering efforts “to become a better person” may be the most plaintive tragicomedy Franzen has ever written.

At a party, Perry confronts a minister and a rabbi: “What I’m asking,” he says too loudly, “is whether goodness can ever truly be its own reward, or whether, consciously or not, it always serves some personal instrumentality.”

Both religious leaders respond to Perry with academic formality, but Franzen hears the agonising paradox in his question. Indeed, the novel is tightly constructed to reach its crescendo with a trip to a Navajo reservation for an act of charitable outreach that’s marbled with vanity and racism.

Although lampooning such do-goodism would have been easy, Crossroads lets the chaff and the wheat grow together. At points, Franzen sounds as though he’s writing an answer to On Moral Fiction John Gardner’s 1978 critique of the failure of contemporary novels to “provide us with the flicker of lightning that shows us where we are”.

The result is a story of spiritual crises with a narrative range more expansive than Marilynne Robinson’s Gilead novels, which can sometimes feel liturgical in their
arcane ruminations.

Franzen is working closer to the practical theology and moral realism of John Updike’s Rabbit, Run and In the Beauty of the Lilies.

Grasping at reeds of grace and selfishness, the Hildebrandts demonstrate in the most poignant way how mortals stumble through life freighted with ideals that simultaneously mock and inspire them.