France’s Macron opens up about love to autistic interviewers

LE PECQ, FRANCE (AP) – The question for France’s president about his teenage romance with a teacher at his high school was so close to the bone, so eye-popping in a country where politicians largely keep their private lives to themselves, that the interviewer couldn’t quite rustle up the courage to ask it.

So he got Emmanuel Macron to pose it to himself.

“He is the president,” the French leader said, reading the question out loud from a piece of paper his interviewer handed to him.

“He should set the example and not marry his teacher.”

Ouch. A group of interviewers on the autism spectrum, described by their publication as “atypical journalists”, got France’s 45-year-old president to talk about himself with unusual and illuminating candor in a televised interview this weekend, with frank but fair no-filter questions that professional journalists mostly don’t dare ask of the French leader.

The interviewers from Le Papotin, a journal founded in 1990 in a Paris-region day care centre for young people with autism, playfully grilled Macron about his marriage to Brigitte, his friends (he said he doesn’t have many), Russian President Vladimir Putin and other matters in his heart and thoughts. 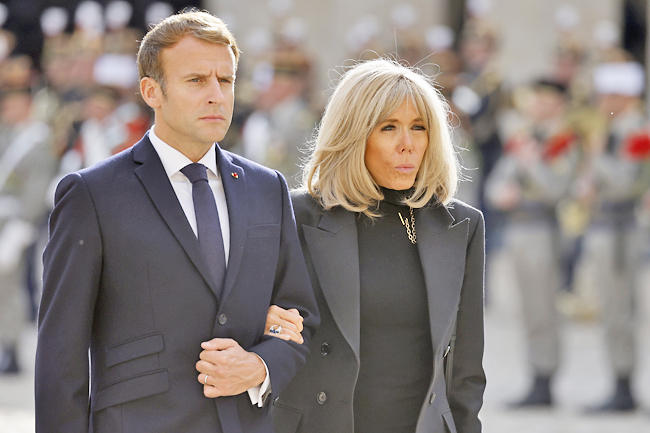 In the process, they winkled out some remarkably intimate details and gave Macron a platform to show a more personal side at a critical juncture in his second term as president.

His government is embarking on a high-risk effort to push back France’s retirement age, a promised reform of the pension system that is infuriating critics and threatens to bring protesters onto the streets.

Their Macron interview was filmed in Paris in November and broadcast by France Televisions, which said the only rule was: “Anything can be said to the Papotin but, most of all, anything can happen!”

Macron responded gamefully, even to the probing about his romance with Brigitte, 24 years his senior. She was Brigitte Auzière, a married mother of three children, when they met at the high school where he was a student and she was a teacher.

She later moved to the French capital to join Macron and divorced. They married in 2007.

“It’s not about setting an example or not, you see? When you’re in love, the choice isn’t yours,” Macron said in his defence.

“She wasn’t really my teacher. She was my drama teacher. It’s not quite the same,” he additionally ventured, a wiggle-round that Macron himself chuckled at and which provoked peals of laughter and a teasing “he’s crafty!” from one of the interviewers sat beside him.

To another delicate question – “Do you have a lot of dough?” – the former banker said he earns less now as president, without divulging figures.

On friendship, he said: “It’s not the best job to have lots of friends.”