ANN/THE STAR – If you’re thinking about bringing your dog with you on a bike ride, there are a few things to consider first.

Is the dog fit enough to keep up? And if not, can you transport the animal on the bike? In either case, the dog should be acclimated with patience.

Running along next to a bike is really only suitable for healthy adult dogs, said Sarah Ross, a pet expert with an animal welfare organisation in Germany.

As a rule of thumb, she recommends that the dog should be at least one-and-a-half years old. Old dogs and overweight ones also shouldn’t be expected to participate in this strenuous activity.

The breed also plays a role. While typical family dogs such as Beagles and Labradors, as well as herding and hunting dogs, have plenty of endurance, short-snouted breeds such as French and English Bulldogs are physically unsuited for long periods of running. 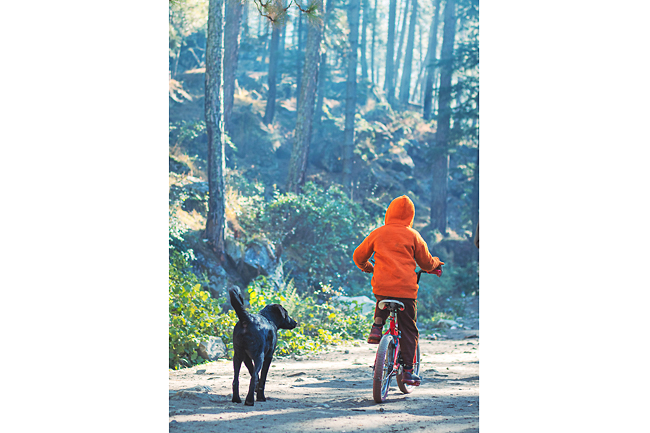 “To begin with, you should first familiarise the dog with the bike while it is still standing,” Ross recommended. If the four-legged friend sniffs the bike, reward this with praise and treats.

In order to introduce the dog to the new kind of locomotion, first push the bicycle along. If the dog runs alongside willingly, you can saddle up. “It’s a good idea to practise in a traffic-calmed zone or in a parking lot,” Ross said.

Once under way, you should keep an eye on the dog to make sure it’s not physically overtaxed. The pace is best set by the animal itself.

Depending on breed and fitness, 10 kilometres at a time is possible, said Alexander Giebler from a cycling awareness campaign in Germany.

But if the dog pants heavily or slows down, it’s time to take a break. Even if the dog is not made for running over long distances, a joint bike tour is not out of the question.

“Smaller dogs can ride along in special bicycle baskets, larger dogs can be taken along in small trailers as passengers,” Ross said.

ACCUSTOM THE DOG TO THE BIKE TRAVEL

If a dog knows a bicycle basket as well as his own basket, it will remain seated during the ride, says dog trainer Anton Fichtlmeier.

Ideally, this will be a basket mounted on the handlebars so that you always have an eye on the dog.

So that steering the bike isn’t affected, the dog should not weigh over five kilogrammes (kg).

If the dog weighs more, then a bike trailer is an option, and many dog trailers can cater for dogs weighing up to 45kg.

The dog should be carefully accustomed to the trailer. To build trust, you can try a classic method from puppy school. First, lure the animal into the trailer with a treat and then out again before giving it a reward.

The first test rounds with the dog and trailer should be carried out carefully. First, push the trailer with the dog on board before coupling it with the bike and starting to cycle.

When riding in a cargo bike, the acclimation process is very similar, said Ross: Build trust, praise boarding, push first, and then ride.

“If the dog shows fear or stress behaviour during any of the steps, by all means be patient and return to the previous step first,” the pet expert advised.

However, she said that not every dog will take to riding in a basket, trailer or cargo bike: “Some dogs just don’t like it and it’s important to accept that as an owner.”