It was followed three minutes later by a second quake of magnitude 4.5 in a nearby county where the deaths and injuries occurred, according to CCTV.

Footage obtained by the broadcaster showed dozens of schoolchildren screaming and ducking under desks as their building started to shake, before dashing out of the classroom with arms over their heads.

Another video posted on social media by state-run broadcaster CGTN appeared to show the first quake sparking a landslide that damaged cars and left rocks and soil strewn over a road.

Authorities in the city of Ya’an dispatched more than 4,500 people to the quake area, including emergency rescue workers, firefighters and military police, CCTV reported. It said the city was “going all out to rescue those who have been trapped… and reduce the number of dead to the greatest extent possible”. 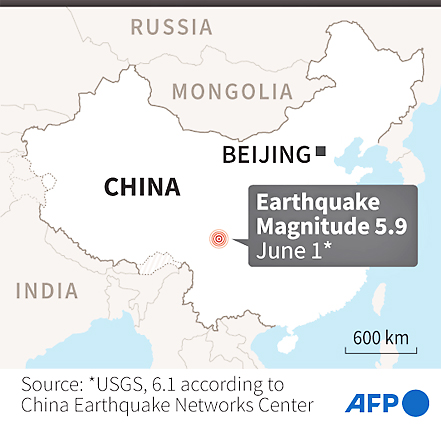 Officials were also scrambling to “ensure no casualties are caused by secondary disasters”, CCTV added.

The China Earthquake Networks Centre said the first quake, in Ya’an’s Lushan county, struck at a depth of 17 kilometres at about 5pm local time.

The United States Geological Survey said the quake registered a magnitude of 5.9 and was shallower at a depth of 10 kilometres.

Tremors were felt in cities across Sichuan province, damaging some telecommunications lines, state media reported. Provincial authorities said some buildings had been damaged but there were no initial reports of any structures collapsing.

At a press briefing yesterday, officials at the provincial earthquake bureau said the first quake was an aftershock from a magnitude 7.0 quake in 2013 that killed around 200 people.

A shallow quake on the border with neighbouring Yunnan province in January this year injured more than 20 people.