MADRID (AFP) – Rescuers said they found four bodies on a migrant boat off the Canary Islands yesterday, just hours after a lone survivor had been pulled to safety, with an non-governmental organisation (NGO) saying it had set sail with 34 people aboard.

Spain’s Salvamento Maritimo coastguard said on Twitter that it had “recovered the bodies of four people” from a boat some 150 nautical miles southwest of Gran Canaria island, with the lone survivor rescued on Saturday night by a passing merchant ship and then evacuated by helicopter.

Caminando Fronteras Head Helena Maleno from a Spanish NGO that helps migrant boats in trouble at sea and families searching for loved ones said on Twitter they had received a distress call from the same vessel a week earlier after it set sail from Western Sahara.

At the time there were 34 people on board.

“On September 24, we received an alert about a boat which had left the coast just south of Laayoun at dawn that morning,” she tweeted, saying they had alerted rescuers.

After a week with no news, a boat was spotted south of the Canary Islands carrying “an exhausted 26-year-old man and four bodies. By the end of the night, we knew it was the same boat that had gone missing with 34 people on board”, she said.

“A new tragedy on one of the most deadly migrant routes – the Canaries route,” Maleno said, counting “33 more victims”.

“Only four bodies have been found. The rest of the victims, a total of 29, have been swallowed up by the ocean. Their families will suffer grief terribly with no bodies to be able to say goodbye to.” 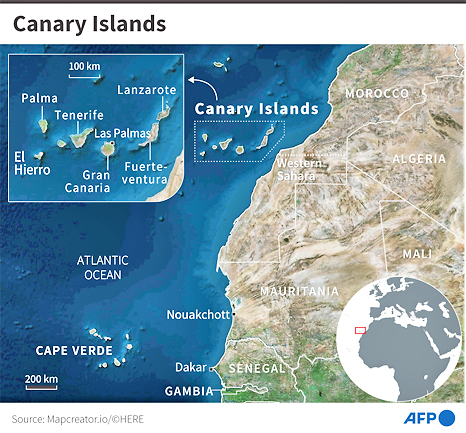