Foundation of a civilisation

ANN/CHINA DAILY – The Palace Museum in Beijing, China’s imperial palace from 1420 to 1911, attracts numerous visitors to admire its grand scale, precise layout and magnificent architecture. But on the Loess Plateau, there is a long-forgotten site that is home to a large-scale palace-like complex with a similar layout – a central axis and evenly distributed rammed earth terraces.

This one, however, was built by ancient people about 5,000 years ago.

The Nanzuo site, located in Nanzuo village, on the Dongzhi plateau in Qingyang city, Northwest China’s Gansu province, was first found in a national survey of cultural relics in 1958. Then, in the 1980s and ’90s, six archaeological missions were carried out on the site, and the main structure, which was named F1, was discovered. At the time, though, it didn’t arouse much interest and the size and significance of the site remained a mystery.

However, some insightful people, like archaeologist Yan Wenming, an expert in Neolithic archaeology, saw the site’s potential. Yan often said Nanzuo was of vital importance, but just how important had yet to be confirmed.

Yan’s emphasis urged Han Jianye, a former student and a professor at Renmin University of China, to survey the site in 2020, which led to a new round of archaeological studies. Last year, an archaeological team, led by Han, was formed by the Gansu Provincial Institute of Cultural Relics and Archaeology and Renmin University of China, among others. 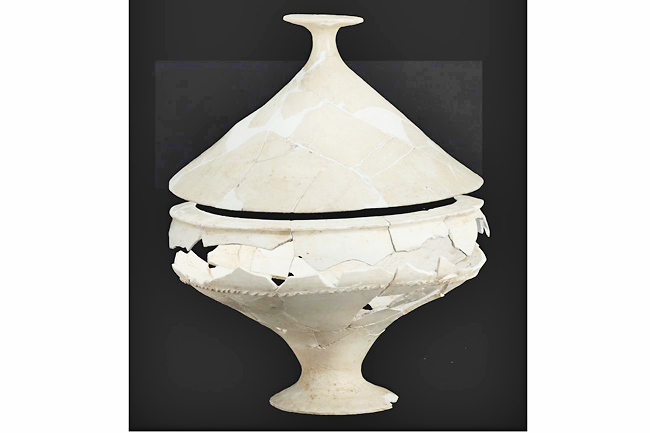 Employing multidisciplinary methods, excavation, chronological studies and technological analysis of pottery, as well as flora and fauna and environmental archaeological studies, have since been undertaken.

The latest study shows the site dates to between 4,700 and 5,200 years ago. Its core area, encircled by nine terraces, has an area of 30 hectares and belongs to the late period of the Yangshao Culture, dating back 4,700 to 7,000 years across the northern part of China.

Discovered in 1921 in Yangshao village, Henan province, Yangshao has been known as a site for Neolithic culture along the middle reaches of the Yellow River. That discovery represents the birth of modern archaeology in China.

According to Zhang Chi, a professor at the School of Archaeology and Museology, Peking University, the general scale of Nanzuo is unprecedented.

“Nanzuo site is twice the size of the extant Erlitou site, widely believed to be the capital of the late period of the Xia Dynasty, from around the 21st Century to the 16th Century BC.

Its area is similar to the size of that at Liangzhu, a Neolithic site in the Yangtze River Delta,” said Zhang.

With a southern exposure, the main building, F1, has a total area of more than 800 square metres, and the internal floor space is more than 630 square metres. It is divided into an antechamber and a rear hall, with three doors.

“Architecture in later dynasties often shows such a layout as well. The middle door is believed to be holy and not one that is normally used, and the two on the sides are subordinate,” said Han.

He also mentions that architecture found at the Dadiwan site, dating back 4,800 to 8,000 years in Gansu, has such a design, too, although the structure is much smaller in size than that of Nanzuo.

East of F1 is a space named F2, believed to be a place of sacrifice, from which archaeologists have unearthed stunning cultural relics, like exquisite white and black pottery that has never been found on the Loess Plateau, and a large amount of carbonized rice.

“Some parts of the white pottery are as thin as eggshells. We don’t know how ancient people made them,” said a member of the Nanzuo archaeological team, who is also an assistant professor at the Institute of Culture and Heritage of the Northwestern Polytechnical University in Xi’an, Shaanxi province, Li Xiaolong.