THE WASHINGTON POST – More than a half-century after the Allied victory in World War II, Normandy and Stalingrad tend to overshadow the people and events that gave the war its global reach.

But there were many other battlefields and modes of combat, one of which was the crucial intelligence campaign carried out by mostly forgotten men and women in the Middle East. That’s the story Gershom Gorenberg restores to memory and esteem in War of Shadows, a masterpiece of scholarship and synthesis that also reads like a thriller.

The story opens in 1942, when the Axis appeared to be winning the war and Field Marshal Erwin Rommel’s army was so close to Cairo that the British General Headquarters was burning its archives.

“The flames were too hot,” Gorenberg observed, “and half-burnt secrets floated out over the city.”

A young cipher clerk named June Watkins, serving in Britain’s Women’s Auxiliary Air Force, was armed with a revolver while she worked: “Among other things, they learned how to shoot themselves,” the author explained. “Women who knew the ciphers were not to fall into enemy hands.” 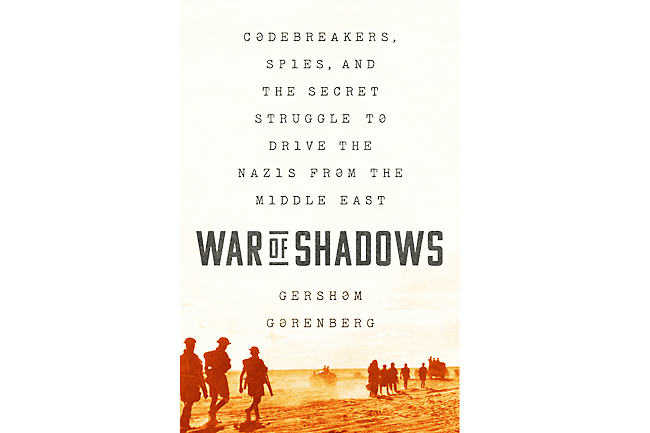 War of Shadows is based on meticulous and exhaustive research that ranged from “archives in places from Tel Aviv to Palo Alto to the homes of the children and grandchildren of people whose names have been forgotten though they changed the direction of history.”

One reason, as Gorenberg revealed, was that the spies and spymasters who made history were told, “Now history must have no memory of you.”

Yet the book also flashes and sparkles with the kind of observed detail that we are accustomed to finding only in spy fiction.

The highest praise that can be bestowed on his book is that it will remind readers of a cloak-and-dagger tale by John Le Carré with an armature of fascinating historical annotation.

Gorenberg is a veteran journalist and historian based in Jerusalem, the author of three previous books about aspects of the Middle East (The Unmaking of Israel, The Accidental Empire and The End of Days), a contributing columnist for The Washington Post, and a longtime contributor to the New York Times Magazine, the New York Review of Books, the Atlantic and Haaretz.

Facts on the ground in North Africa figure prominently in War of Shadows, but equally important is the work that was conducted in an English country house called Bletchley Park, where the secret messages that passed between Berlin and its battlefield commanders were decoded and selectively shared with Allied counterparts.

But the deciding factor was Winston Churchill’s conviction that the decision to defend British primacy in the Middle East was “at once awful and right”.

According to Gorenberg, “It was a wager that changed the shape of the war, and of the Middle East then and after.”

Indeed, Gorenberg allowed us to see that a Middle Eastern version of the Great Game was conducted in parallel with armed combat.

Nazi plotters imagined that Egyptian dissidents could be persuaded to “switch to the German side”.

The same sentiment can be detected in the recollections of Anwar Sadat, then a young officer in an Egyptian artillery brigade that was serving with the British army in the campaign against Benito Mussolini’s expeditionary force. “Our enemy was primarily, if not solely, Great Britain,” Sadat later explained. The code-breakers at Bletchley Park confirmed the strategic ambitions of the Axis in the Middle East.

Bombers, fighters and transport planes were being sent from German-occupied Greece, “with Iraq markings or no markings at all”, for service against the Allies. After all, as Gorenberg pointed out, “both Iraq and the Vichy-ruled territories of Syria and Lebanon were fully aligned with the Axis.”

One tool for measuring the depth of Gorenberg’s book is the dramatis personae that appear at the outset, ranging from world historical figures like Churchill, to a young naval intelligence officer whose wartime experiences inspired him to create the most famous spy of all.