TOKYO (AFP) – Judith Gunion is desperate to know if she is going to the Tokyo Olympics, not as an athlete, but one of thousands of foreign volunteers left in limbo by virus uncertainty.

Around 9,600 foreigners in Japan and abroad are signed up for the virus-postponed Tokyo Games, which organisers insist will go ahead this year despite raging infections worldwide.

But they now face an agonising wait for news as tough decisions are made about how to hold the event safely, or at all.

“Everything’s on hold,” Gunion, who has already booked her flights, told AFP from Ipswich in eastern England.

“I’ve been ploughing money into this, not doing things, not going places… ploughing everything into having a really good time,” the 73-year-old said.

Gunion is part of a community of globetrotting sports volunteers, many inspired by the London and Rio Olympics. 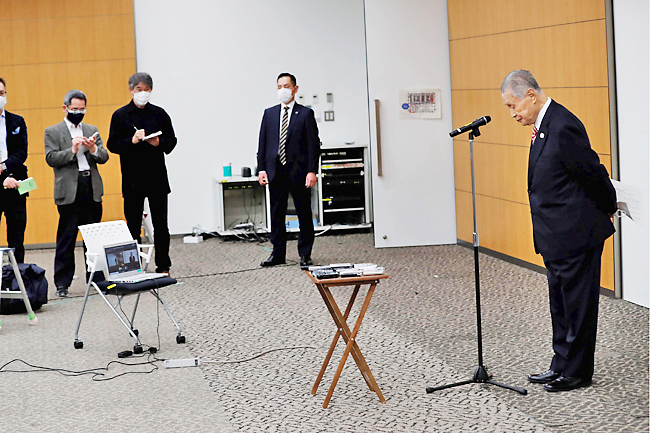 They do not get a penny for their time, and have to pay their own way, but they say it is worth it for the excitement, camaraderie and opportunity to travel and meet like-minded people.

Gunion is registered to volunteer at Tokyo’s new national stadium, facilitating interviews between athletes and the press after athletics competitions.

She has been looking forward to the role since her interview in April 2019, but now wonders what it will look like at a scaled-back, infection-averse Games.

“I know we’re supposedly invaluable, and necessary, but I think our situation is probably quite low on their list,” she said.

“I’m just hopeful they still need experienced volunteers there in some capacity.”

Gunion has had her first dose of COVID-19 vaccine – which Games organisers say is not a requirement for participants – with her second due in April.

Amirahvelda Priyono, from Surabaya in Indonesia, thinks she too will be vaccinated by the opening ceremony on July 23.

The 26-year-old, who speaks English, French and Indonesian, will interpret for athletes at cycling events – a crucial role in notoriously monolingual Japan.

When the Games were postponed last March, “I felt, wow, 2020 really is bad,” she said. “But I tried to think positively.”

Priyono has used the extra year to start learning Japanese and seek a corporate sponsor for travel and accommodation costs, though she does not plan to book flights until she receives her shift rota in March or April.

“If it’s cancelled, I’ll feel completely sad and disappointed, but at the same time, I’d think it’s for the best,” she said.

Of the 80,000 volunteers recruited as the unpaid backbone of the Games, around 12 per cent are non-Japanese, from 120 countries and territories, including some living in Japan.

After a gaffe-prone Tokyo 2020 chief Yoshiro Mori made sexist comments that sparked uproar in Japan and abroad last week, nearly 400 volunteers reportedly dropped out in protest. The nationalities of those who quit were not made public.

But that has not deterred Priyono to change her plans.

“I know that being sexist is bad… but everyone makes mistakes,” she said.

Both Gunion and Priyono think the situation will be clearer by spring, when organisers will make decisions about spectators.

But some overseas volunteers have cancelled their trips, Gunion said.

“I understand that. With my age, I’ve got to consider it,” she said.

“But this is Japan… if Tokyo goes ahead, it’s because they know they can do it safely.”

A keen international volunteer, Mary O’Leary, 61, loves the “network and family atmosphere” of the Games.

“It’s a great way of getting to see sport at a very high level, sports you may not necessarily buy tickets for. You end up getting really interested,” she said.

O’Leary is hoping to travel from the United Kingdom (UK) to volunteer at equestrian events, but said she would “feel comfortable only if I have had my vaccines”.

She is worried that asymptomatic volunteers could cause outbreaks in Japan and other countries after the event, but is trying to stay optimistic.

“The situation may be completely different by the time the Olympics start.”