KABUL, AFGHANISTAN (AP) – Noura’s determination to play sports was so great that she defied her family’s opposition for years. Beatings from her mother and jeers from her neighbours never stopped her from the sports she loved.

But the 20-year-old Afghan woman could not defy her country’s Taleban rulers. They have not just banned all sports for women and girls, they have actively intimidated and harassed those who once played, often scaring them from even practising in private, Noura and other women say.

Noura has been left shattered. “I’m not the same person anymore,” she said. “Since the Taleban came, I feel like I’m dead.”

A number of girls and women who once played a variety of sports told The Associated Press (AP) they have been intimidated by the Taleban with visits and phone calls warning them not to engage in their sports. The women and girls spoke on condition of anonymity for fear they will face further threats.

They posed for an AP photographer for portraits with the equipment of the sports they loved. They hid their identities with burqas, the all-encompassing robes and hood that completely cover the face, leaving only a mesh to see through.They didn’t normally wear it, but they said they sometimes do now when they go outside and want to remain anonymous and avoid harassment.

The ban on sports is part of the Taleban’s escalating campaign of restrictions that have shut down life for girls and women. 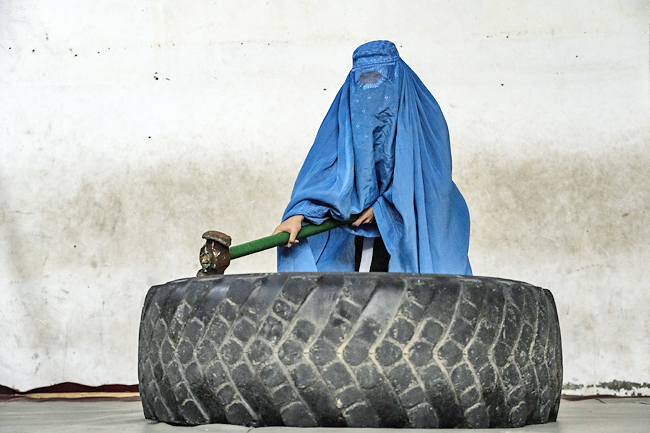 Since their takeover of Afghanistan in August 2021, the Taleban have barred girls from attending middle and high school. Last month, they ordered all women thrown out of universities as well.

The Taleban require women to cover their hair and faces in public and prohibit them from going to parks or gyms. They have severely limited women’s ability to work outside the home and most recently forbade non-governmental organisations from employing women, a step that could cripple the vital flow of aid.

Even before the Taleban, women’s sports were opposed by many in Afghanistan’s deeply conservative society, seen as a violation of women’s modesty and of their role in society.

Still, the previous, internationally-backed government had programmes encouraging women’s sports and school clubs, leagues and national teams for women in many sports.

A 20-year-old mixed martial artist recalled how in August 2021, she was competing in a local women’s tournament at a Kabul sports hall. Word spread through the audience and participants that the advancing Taleban were on the city’s outskirts. All the women and girls fled the hall. It was the last competition the young athlete ever played in.

Months later, she said she tried to give private lessons for girls. But Taleban fighters raided the gym where they were practising and arrested them all.

In detention, the girls were humiliated and mocked, she said. After mediation by elders, they were released after promising not to practice sports anymore.

She still practises at home and sometimes teaches her close friends.

“Life has become very difficult for me, but I am a fighter, so I will continue to live and fight,” she said.

Spokesman of the Taleban’s Sports Organisation and National Olympic Committee Mushwanay, said authorities were looking for a way to restart sports for women by building separate sports venues.

But he gave no time frame and said funds were needed to do so.

Taleban authorities have repeatedly made similar promises to allow girls seventh grade and up to return to school, but still have not done so.

Noura faced resistance her whole life as she tried to play sports.

Raised in a poor Kabul district by parents who migrated from the provinces, Noura started out playing football alongside local boys in the street. When she was nine, a coach spotted her and, at his encouragement, she joined a girls’ youth team.

She kept it a secret from everyone but her father, but her cover was blown by her own talent. At 13, she was named the best girl soccer player in her age group, and her photo and name were broadcast on television.

“All over the world, when a girl becomes famous and her picture is shown on TV, it’s a good day for her and she’s at the peak of happiness,” she said. “For me, that day was very bitter and the beginning of worse days.”

Still, she sneaked off to the award ceremony. She broke down in tears on stage as the audience cheered.

“Only I knew I was crying because of loneliness and the hard life I had,” she said.

When she found out, her mother set fire to her football uniform and shoes.

Noura gave up football, but then turned to boxing. Her mother eventually relented, realising she couldn’t stop her from sports, she said.

The day the Taleban entered Kabul, she said, her coach called her mother and said Noura should go to the airport to be taken out of the country.

Noura said her mother didn’t deliver the message because she didn’t want her to leave.

When she learnt of the messag, too late to escape, Noura said she cut her wrists and had to be taken to the hospital.

“The world had become dark for me,” she said.

Three months later, someone who identified himself as a member of the Taleban called the family and threatened her.

“They were saying, why did you play sports? Sports are forbidden,” she recalled.

Terrified, she left Kabul, disguising herself to travel to her family’s hometown. Eventually, she returned but remains in fear.

“Even if my life was difficult, I used to have confidence in myself and knew that, with effort, I could do what I wanted,” she said. “Now I don’t have much hope anymore.”