For World Cup visitors, a peek into Islamic art, heritage

DOHA, QATAR (AP) – An emerald inscribed for a Mughal emperor. A Safavid-period knotted wool carpet. An Ottoman-era curtain, intricately embroidered with metal threads, which was part of the covering of the Kaabah, the cube-shaped structure in Makkah.

Like tiles in a mosaic, the collection in Doha’s Museum of Islamic Art (MIA), provides visitors with a peek into diverse aspects of Muslim heritage, art and craftmanship with items spanning three continents and many centuries.

In a capital where so much is new, the museum showcases a variety of the old and historic.

And with football fans from around the world descending on Qatar, the story that the museum tells now has more listeners. On a recent day, visitors – some wearing football jerseys or scarves – stopped to snap photos, inspect an object, read a label or browse shelves lined with books and souvenirs.

“The architecture itself is very good. I like the inside displays; the pieces are very impressive,” said Bert Liu, who lives in the United States. “Before I knew very little about Islamic history but after I saw a lot of objects, I feel I learnt more.”

Qatari officials said they hope the tournament will help provide visitors with a better understanding of their culture and that of the larger region. The World Cup host has faced intense criticism over rights issues, including the treatment of migrant workers, and accusations of “sportswashing” or attempting to use the event’s prestige to remake
its image.

Sports is not the only area where Qatar, a small country with big ambitions and the vast wealth to match, has sought to leave its mark as part of a quest for global influence. It has also been aiming to carve out a name in the culture and arts arenas, including with museums like MIA. 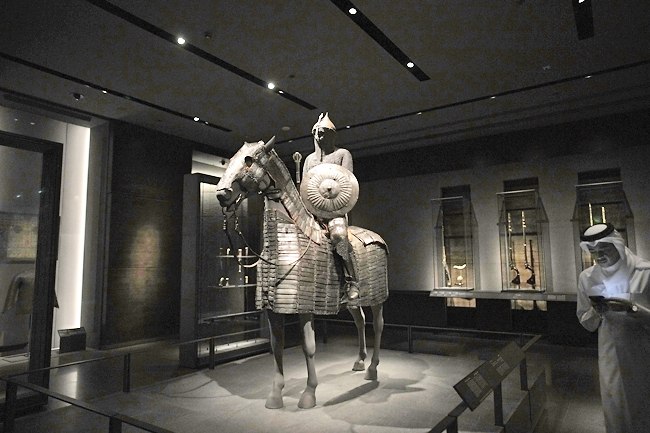 “Qatar has invested much in terms of establishing itself as a Middle Eastern hub for culture and art with soft-power aspirations being a key factor driving these efforts,” said Gulf State Analytics CEO Giorgio Cafiero, a geopolitical risk consultancy based in Washington, DC.

“Museums in Doha have done much to help the Qataris promote their culture, tell their stories, and share their unique perspectives with global audiences.”

And now, he noted, many football fans may be visiting the region for the first time.

Qatar is far from alone in such grand, well-financed cultural endeavors, with other Gulf countries also vying for tourists as they strive to diversify their economies. “We have the ambition to show Islamic culture in all its diversity and sort of also show the regional differences,” said MIA’s Director Julia Gonnella.

“The idea is really for education, for diversity, also to build up a society beyond oil and gas.”

The museum attracts both Muslim and non-Muslim visitors, she said, adding that MIA’s “first audience” is the people who live in Qatar.

Designed by renowned architect I M Pei, the MIA complex has a presence that is somehow both imposing and simple, with its waterfront location, light-coloured exteriors and sharp and clean architectural lines. Geometric shapes and Islamic motifs appear inside.

Windows drench the surrounding area in sunlight and provide a view of modern-looking buildings jutting into the sky across the water.

The museum’s collection includes metalwork, ceramics, woodwork and textiles. Items on display include jewellery, manuscripts of Al-Quran, armour and arms.

Gabriel Petersen, who visited from Australia, said he was impressed by how old some of the objects were and enjoyed seeing exhibits from different parts of the world. “It’s just a different culture,” he said. “You don’t get much of that in Australia.”

The museum also offers glimpses into religious beliefs and rituals. Visitors can read about the five pillars of Islam – the profession of faith, prayer, almsgiving, fasting and haj or pilgrimage – or learn about haj rituals and different funerary practices in the Islamic world.

Initially opened in 2008, the museum closed in April 2021 and re-opened a month before the World Cup with expanded interpretive materials to help provide more context for items on display.

A temporary exhibition titled Baghdad: Eye’s Delight celebrates the capital of Iraq as one of the “most important and influential cities in the Islamic world” and highlights its role as a city “of power, scholarship, and riches”, according to the museum. The exhibition features objects on loan from world-renowned institutions, MIA said.

Rob Humphreys, who was visiting from Wales, said he particularly enjoyed viewing Baghdad from a different angle. “At least in Europe, we tend to associate Baghdad with… war and so on and the invasion,” he said. “Learning about how important Baghdad was as a cultural and scientific and trading city… was really interesting.”

Catrin Evans, his wife, admired the quality of craftmanship dating back centuries in MIA’s collection and thought the calligraphy, jewellery and copies of Al-Quran were “awe inspiring”.

“We tend to think of everything in a European, Western perspective,” she said. “This definitely opened my eyes to the background to Islam and also the culture here.”

At one point, the couple thought of not coming to Qatar for the World Cup because of misgivings over rights’ issues. “We’ve come to learn, but it doesn’t mean we put our values to one side while we’re here,” Humphreys said, adding cultural exchanges are also important to them. “Museums are always good places for generating new ideas, often controversial,” he said. “But it’s a space to express those and explore them and talk and have a dialogue.”