THE WASHINGTON POST – The American public asks a lot of its first ladies. We expect them to absorb the celebrity spotlight without being scorched by its unforgiving glare. We require them to somehow embody and represent all women while being their unique, authentic selves.

Those first ladies are given a lot, too: the rare opportunity to preside on the world stage, not through dint of their own victories and accomplishments, but because they lie down at night with, arguably, the most powerful actor on the planet.

The Bush women hold a unique place in the pantheon of American political spouses. Laura Welch Bush is the wife of the 43rd president. Barbara Pierce Bush was the mother of the 43rd and wife of the 41st. Dorothy Walker Bush was the wife of a United States (US) senator, mother of the 41st president and grand matriarch of what the author J Randy Taraborrelli called “the Bush dynasty”.

You have to go back centuries, to the Adams family, for a similar dynastic story; even so, Abigail Adams, wife of the second president, died several years before her son was sworn in as the sixth. The Bush women, by contrast, overlapped generationally, entwined in a complex linkage of love, admiration, jealousy, pain, resentment and respect – all detailed in Taraborrelli’s new book, Grace & Steel: Dorothy, Barbara, Laura, and the Women of the Bush Dynasty.

The book appears at an interesting moment, when the nation’s gendered expectations of its first spouses are undergoing renewal and re-assessment. Jill Biden said she will be the first of the first ladies to hold a paying, professional job outside the White House. Doug Emhoff is carving his own path as the first-ever second gentleman. 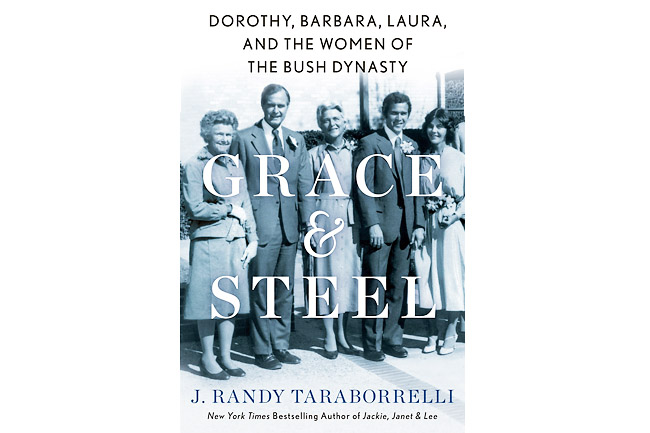 The Bush women were not destined to break the mold – only to maintain it and shape it ever so gently with their own style, personality and predilections. Taraborrelli admiringly illustrates how each woman evolved from tolerating to relishing the spotlight they shared with their husbands, blossoming publicly despite their private challenges. But though this book is chock full of interviews, archival research and gossipy material about the Bush women, there’s little indication of how, or even if, their time in Washington and the monumental events they witnessed shifted their outlook on the world and on the nation they served. Nor do we get much sense that these women recognised the extreme privilege they were granted by merely marrying into the right family.

Where Taraborrelli excels is in excavating the personal histories of the three women and how they were forever shadowed by painful episodes in their lives.

He begins with Dorothy, perhaps “the most misunderstood of all the Bush women”. Described in later years as kind and gentle, she also was daring, assertive, highly opinionated and never hesitant to enforce her code of behaviour upon her many descendants. Born to a wealthy St Louis family, she fell hard for Prescott Bush, six years her senior and of the same social class. She was only 20 when they married in 1921; eager to escape a domineering father, she found that same trait in her husband, made worse by the alcoholism that they tried mightily to keep a secret. Once Bush was elected to the Senate, he commanded everyone in the family to call him “Senator”. Even the grandchildren.

Nonetheless, Dorothy unequivocally supported her husband’s political ambitions and for years penned a syndicated column with the quaint name Washington Life as Seen by a Senator’s Wife by Mrs Prescott Bush. Taraborrelli calls it journalism. It was, in fact, a thinly disguised vanity project to promote her husband’s political career – and her own vast social connections.

Dorothy set the tone for generations of Bushes, often reminding them: “Losing is not an option in this family. We don’t lose. Period.”

But she cut a warm, maternal figure compared with Pauline Robinson Pierce, Barbara’s mother, an imperious, erratic woman who was hypercritical of Barbara, her second daughter, to the point of cruelty. Perhaps that is why, early on, Barbara became known as a bully, a characteristic that would dog her all her life.

The early years of her marriage to Dorothy’s second son, George HW Bush, were also characterised by heartbreak. Taraborrelli offers a moving account of their daughter Robin’s childhood leukemia, the aggressive treatments that failed to save her and the lasting trauma caused by her untimely death. You sense how Barbara’s troubled upbringing and the unresolved grief over Robin’s death contributed to the crippling depression she suffered in later years.

Laura Bush’s West Texas childhood was also traumatic – she was an only child because her mother had countless miscarriages, each one a devastating blow. And then there was Laura’s teenage accident, when she recklessly ignored a stop sign while driving with a friend on a quiet country road and plowed into an incoming car, killing the occupant – a popular boy in her high school. Thanks to her father’s connections, she was never charged, but the psychological consequences haunted her profoundly.

These women faced other difficulties. Taraborrelli is convinced that George HW Bush did, indeed, carry on a decades-long affair with Jennifer Fitzgerald – who often served him in some official capacity or another on the government payroll, an arrangement that would be truly scandalous today. Bush even managed to invite Fitzgerald to George and Laura Bush’s wedding reception. It’s not clear if Barbara ever confronted her husband; it is clear that the affair diminished her sense of self-worth and contributed to her melancholy.

Still, for all the personal heartache, the Bush women had an extraordinary window into significant events during a total of 12 years in the White House: the fall of the Soviet Union; the Persian Gulf War; the September 11, 2001, terrorist attacks; the Iraq War; Hurricane Katrina; the Great Recession. They gamely played the role of consoler in chief when asked and supported their husbands as expected.

But there’s no exploration or analysis of how these events affected their personal politics and views of America and the world – what they learned, what they felt. And Taraborrelli doesn’t seem interested in finding out. He devotes seven pages to 9/11 and its aftermath, and a dozen to the messy divorce between Sharon and Neil Bush, George W’s younger brother.

Perhaps the imperative to focus on domestic life, keep the clan together, burnish the family image and brush away the ugly spots was the central occupation of the Bush women, no matter what was happening outside the White House gates.

They created a singular, admirable legacy, and this book portrays them as genuine, struggling human beings. It says a lot. I wish it said more.