To start a business, it is of utmost importance for a person to have interest and passion for it, and to not dive into it simply for the sake of owning a business.

This is because people who do not have an actual interest and passion for their business will often become discouraged and give up once they face its downside, instead of thinking of the next step to improving their products.

This is the belief of veteran local chocolate maker Zarefah of Zaren Chocolatier.

“That’s the difference between people who venture into business. Interest must be there, and you also have to know your product well,” said Zarefah.

Being a huge fan of chocolate, Zarefah told the Bulletin during an interview that she had always wanted to open her own chocolate shop.

After working at a bank for about 11 years, she still had an adamant interest in chocolate, which sparked her decision to journey into learning how to make chocolate and establishing her own chocolate brand in 2011. 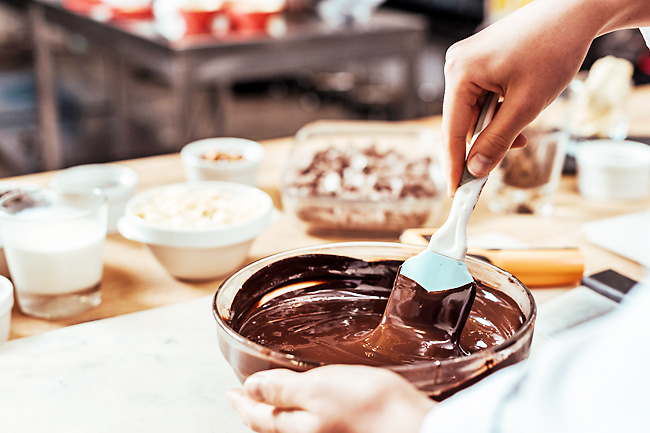 The chocolatier travelled to Australia, Malaysia as well as Belgium for brief classes to learn the techniques in making delicious, high-quality chocolates.

“With chocolate, you either make it from cocoa itself or you use ready-made ones. I learnt how to make both types of chocolate. But in the interest of saving costs it’s better to get ready-made chocolate… I use Belgian chocolate,” shared Zarefah.

She added that high-quality chocolate must be correctly tempered – a process of melting the chocolate, as doing it incorrectly will result in white spots on the chocolate as well as difficulty in taking it out of the chocolate mould, especially when it is not at the right temperature, which is quite different when people use the normal chocolate blocks as the ingredients. Moreover, one also needs to think of the fillings they wish to include with the chocolate for added taste.

“To make chocolate, you really need to have an interest in it. When you don’t have the interest, or patience, you will give up because it’s not as easy as it looks. It just sounds like it is,” said Zarefah. “It’s the process of making chocolate that makes people give up in the end, similar to when people bake kek lapis.“

When it comes to her chocolate, Zarefah often combines chocolate with local favourite fillings including chocolate-coated nuts and biscuits.

She has found that fruit fillings are not quite popular in the country, with the addition of this type of chocolate having notoriously shorth shelf life. However, fruit-fillings version is still available upon request.

Much like any other food and beverage business, she said that whenever she has a new idea regarding flavour or filling, she would first serve it to her family members to gain feedback.

“I also bought my chocolate moulds from Belgium when I was there and I chose them specifically to go with specific flavours so my customers will be able to recognise which design goes with what flavour,” said Zarefah.

The chocolatier then explained that most chocolates around the world can’t be solely made with a machine, and even if they are, the business would need to have quite a big investment as most chocolates are made semi-automatically or fully manually.

She added that her business is the busiest during festivities like Hari Raya Aidilfitri and Chinese New Year as she tends to receive orders just before the celebrations.

She also admitted to feeling ill from working long hours in the kitchen to meet the orders.

As the COVID-19 pandemic hit, Zarefah said the crisis had both positive and negative effects on her business, although it was more positive as demand for her chocolate rose from people’s inability to travel outside the country to look for event gifts due to the travel restrictions.

On the other hand, the pandemic has affected the flow of her ingredients from abroad.

As for the future of Zaren Chocolatier, Zarefah said she wants to make chocolates from cocoa and she is still searching for the right ingredients as its vital to source for good cocoa beans, cocoa butter and vanilla pods, which can be costly.

“It may be more expensive, but I don’t mind doing it for my own satisfaction,” said Zarefah. “I had plans to go back to Belgium this year to learn more about the science behind chocolate and its shelf life, but due to the travel restrictions I wont be able to do it. Hopefully I can visit the country next year.”

In terms of the nation’s development, Zarefah said that being more creative will aid in contributing to the business sector.

“My goal is to look at what Brunei is currently not producing and fill in that gap. Brunei has yet to produce its own chocolate. So my plan now is to produce a variety of chocolates to supply to the local supermarket,” she said.

With confidence, the chocolatier assured that it is possible to recreate quaility chocolate to rival established brands.

“To compete with international names is a huge undertaking, but I want to do it. That’s my plan, to reach that standard. But first, I wish to cater to the local market, so that rather than relying on chocolate from outside, locals can satisfy their sweet tooth from chocolate made locals,” added Zarefah.