VENICE, ITALY (AP) – Andrew Dominik had been trying to make a movie about Marilyn Monroe for over a decade.

The film wouldn’t be a biopic, but an experiential portrait delving into the psyche of Marilyn Monroe and Norma Jeane. It kept falling apart, but the New Zealand native couldn’t let it go. Then he found Ana de Armas, and, he said, the movie came alive.

“It was like love at first sight,” Dominik said, before the world premiere of the film at the Venice International Film Festival. “When the right person walks through the door, you know it.”

The nearly three-hour epic is based on a work of biographical fiction by Joyce Carol Oates and examines the public and private life of the Hollywood icon from her troubled childhood as Norma Jeane to her global stardom as Marilyn Monroe and various relationships along the way, from her mother (Julianne Nicholson) to her marriages to Joe DiMaggio (Bobby Cannavale) and Arthur Miller (Adrien Brody).

“I wasn’t very aware of Marilyn. I was familiar with some of her movies, but for me it was a huge discovery and learning process,” de Armas said.

“We wanted to honour her in the recreations where she was Marilyn, but I also had a lot of room to create the real woman underneath that character. It was about understanding and empathising and connecting with her and her pain and her trauma.” 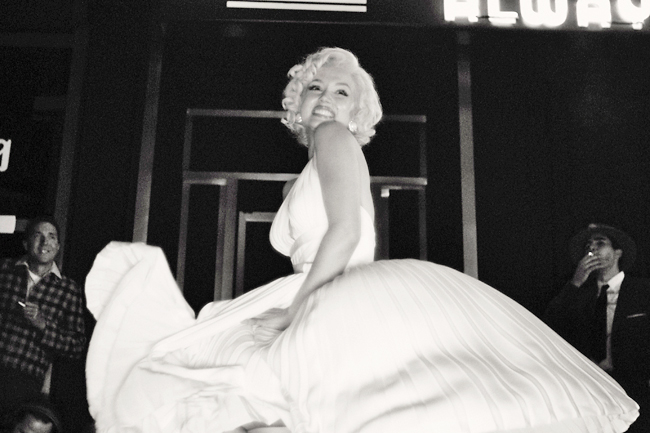 She added, “If you put aside the movie star she is, she’s just a woman, just like me. Same age. It was a project I knew I had to let myself open and go to places I knew were going to be uncomfortable and dark and vulnerable.”

Filming began on August 4, the day Monroe died in 1962 at her home in Los Angeles at age 36. It was an accident and just the result of some delays. But it also was one of many times the filmmaker and his cast felt a somewhat mystical connection to the subject of their film.

Though the story takes many liberties with the facts of her life with the intent of getting to the truth of her life, the production did use real locations like the apartment she and her mother lived in when she was a child and the house she died in.

“It took on elements of being like a séance,” Dominik said.

De Armas agreed that “there was something in the air” being in the same places Monroe had lived.

Blonde has been hotly anticipated for some time: For taking on a figure like Monroe in an experimental way, for its rating, the first ever NC-17 movie that Netflix has made, a designation set by the Motion Picture Association that forbids those younger than 17 from watching the film in the theatre. There’s also curiosity around de Armas’ performance. The Cuba-born actor worked with a dialect coach for a year to prepare.

“Storytelling that is as brave as this is essential,” her co-star Brody said.

And for him, de Armas did more than just play the role. She channeled the person.

“The first day of filming, I went home with this sense of awe that I had the privilege of actually working with Marilyn Monroe,” Brody said. “It’s very rare that I can say that someone transported me to another time and place.”

For de Armas, it was about the challenge.

“I did this movie to push myself… to make other people change their opinion about me,” she said, through some tears. “This movie changed my life.”