THE WASHINGTON POST – If the arc of your life, considered from a distance, has ever seemed akin to an earthquake – soft warning rumbles, seismic shakes, aftershocks that ripple out and lead to future earthquakes – then Nadia Owusu’s stunning new memoir may provide a narrative template. Aftershocks, which takes its resonant title from the geological phenomena, spares little in the way of capturing the disorienting atmosphere of an earthquake: the fear of the Earth’s sudden movement, the terror of being in the midst of a tragedy, the trauma that follows and lingers.

And, of course, there are actual earthquakes in the book, the first of which, in a remarkable case of life being stranger than fiction, happened in Armenia, her mother’s birthplace, the day her mother left Owusu when the writer was just three.

From that day on, Owusu, who is half Ghanian and half Armenian and was born in Dar es Salaam, Tanzania, became obsessed with earthquakes, both as geologic events and as a template for her own life’s shocks. “My mind has a seismometer inside it,” she writes. The natural disasters remind her of jazz, particularly the unpredictable, improvisational wildness of John Coltrane, and thus these two themes appear in Aftershocks as compasses of sorts, guides to the memoir’s non-linear, constantly shifting structure.

The book follows the wide-ranging life of its writer, who from a young age felt a series of shocks that would define her life: the divorce of her mother and Ghanaian father when she was three; the death of her father when she was 14 from cancer and, as she learns in shock later, perhaps AIDS; her late father’s partner, Anabel, attempting to take over as her mother; and Owusu’s profound sense, as she moved around the world as a multiracial child, that she never belonged anywhere, too light-skinned to fit in with other Ghanaians, too dark-skinned to blend in in Turkey, too briefly in Dar es Salaam or Rome or Addis Ababa to feel deeply rooted in any. “I speak three and a half languages that do not belong to me,” she wrote. 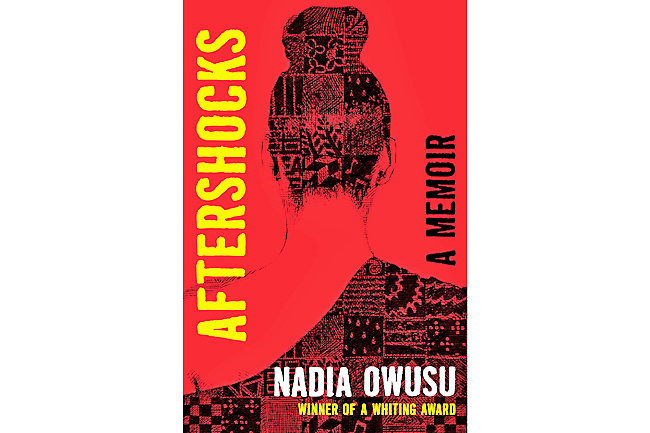 The memoir begins, appositely, with her mother, whose departure changed the course of Owusu’s life. “My mother left before I was old enough to grasp what the leaving meant,” Owusu reflects. “I had never been forced to face the rejection.” From then on, Owusu and the rest of her immediate family moved around the globe as her father took on new jobs, which often helped pay for her schooling. Like many people unsure of their identities, Owusu initially played the part of a chameleon of sorts, adopting the characteristics of wherever she was and adapting to them.

In this way, she learned to code-switch, shifting her accent from a British-inflected lilt to the soft twang of a vague American; she also shifted her identity. Once, as she recounts in a telling passage, she was one of only two Black students in an English school, and, to fit in with the popular, wealthy White girls, she made fun of the other Black student, who, like her, was from Africa. She loathed herself for this later, yet her inclusion of this incident is important, allowing her to discuss the privileges she grew up with: the means to pay for schooling; the ability to, if not pass as White, be accepted as less Black and, therefore, less of a threat to White people. This idea, she notes aptly, reflects the extreme degree to which the scourge of anti-Blackness may pervade our thinking, even for other Black writers.

These themes and events, combined with horrific memories from her youth – Italian men groping her when she was a tween, or a terrifying scene in Addis Ababa, Ethiopia, when armed soldiers briefly occupied the base where she and her father were staying – form a hallucinatory, harrowing tale. We witness, in sections both tantalising and tragic, Owusu’s struggles with mental illness. The book becomes a form of attempted self-care, repair through revelation.

“The idea of roots setting a person free is counterintuitive,” Owusu writes in a passage that is perhaps most like a key to the text as a whole, “but deracination from the past, from land, from family, from mothers, makes for an unstable present. We must have, or we will always search for, a place to bury our bones”.