THE WASHINGTON POST – I grew up in Chicago raised by an activist mother who force-fed her kids race pride, so of course I knew that the city’s first nonnative settler was a Black man, the Haitian fur trapper Jean Baptiste Point du Sable.

What I didn’t know was that du Sable was also the first Black man in Chicago to get locked up. I learned that from Halfway Home: Race, Punishment, and the Afterlife of Mass Incarceration, Reuben Jonathan Miller’s trenchant guide to the legal and social cruelties piled on Americans who have felony convictions. This group numbers nearly 20 million people, including one in three African American men.

Miller’s expertise stems from three primary sources: the five years he spent as a volunteer chaplain at Chicago’s Cook County jail, his years of scholarly research as a professor in the University of Chicago’s famed school of social work and his life experience as an African American man, born and raised in Chicago, with the scars to show for it. Miller’s father and two of his brothers all did time. He wrote, “I knew about foster homes and group homes and juvenile detention centres and jails and prisons because everyone I grew up with had been to at least one of these facilities” or had a close relative who had been incarcerated.

Halfway Home is mainly a book of stories. We meet Martin, who as a child in Chicago in the 1960s suffered repeated abuse, which led to a spiral of addiction, homelessness and many court cases. Miller encountered him at the Cook County jail, after Martin picked up a drug distribution charge when the cops found three rocks of crack cocaine in his pocket during a drug sweep of a housing project.

The judge thought, correctly, that the felony charge was excessive, but the prosecutor refused to reduce the charge because Martin had a long criminal record. 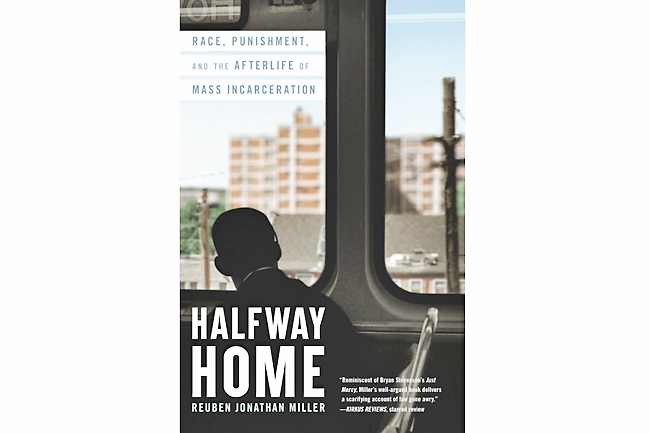 Martin wanted to fight the case, but he could not make the USD2,000 bail, meaning he would be stuck in jail awaiting his trial. But if he spent more than 30 days in jail, his veteran’s benefits would be suspended and he would be kicked out of his residence, a homeless shelter.

Martin accepted a plea bargain that allowed him to be released with two years of probation. He is now sober and employed as a truck driver, and after three years on a waiting list, he got his own apartment in a building for homeless veterans. Martin is 65-years-old.

In the book’s bleak world, this counts as a happy ending. Almost everybody prosecuted for a crime cops a plea, mainly because the consequences of not doing so are too risky.

The problem is that confessing your guilt to a felony puts you in the crossfire of a vast number of rules that diminish not only your citizenship but your humanity.

Miller wrote that in Illinois there are more than 1,400 such laws, “including more than 1,000 employment regulations, 186 policies that limit political participation, 54 laws restricting family rights, and 21 housing statues”.

Halfway Home reads like an answer rap to Crook County: Racism and Injustice in America’s Largest Criminal Court, Nicole Gonzalez Van Cleve’s searing account of the degradation of accused people in Chicago at the hands of the police, prosecutors, judges and sometimes their own lawyers. The combined lesson of the two books is that poor Black people get played during the criminal legal process, and they continue to get played after they ostensibly leave it.

As a law professor I read Halfway Home with a measure of jealously. Miller wrote about criminal justice with the expertise of a legal scholar, but his life experiences and training as a social worker endow his analysis with a vividness and empathy that elude some other critiques of mass incarceration. And he told stories with a plaintive lyricism that reminded me that Black folks in Chicago were primary creators of the American musical tradition known as the blues.

Still, there are parts where Miller might have offered more sophisticated analysis to provide a deeper context for all the narratives of private and state violence.

I also have a quibble with the book’s weird appendix that is part the standard ethnographer’s explanation of research methods and part a philosophical discourse on “mind-body dualism” that reads like it’s from a different, less compelling book. Miller wrote that though du Sable had established a successful trading post, he “died like many formerly incarcerated Black men – penniless in his final years, his very American story almost lost to history”.

The very American tragic stories that Miller relates will not be lost, thanks to this fine and necessary book.

From one Chicago native son to another: Keep telling the stories, until the law of our hometown – and country – recognises that Black lives matter.