Football resuming in Britain after pause due to queen’s death

LONDON (AP) – Football was resuming in Britain yesterday after a pause over the weekend as a mark of respect following the death of Queen Elizabeth II, with lower-division games set to return to normal this week.

The Premier League, however, has yet to confirm when the top flight will be back playing again, with logistical issues likely arising ahead of the State Funeral taking place in London on September 19.

The English Football League (EFL) – which runs the three divisions below the Premier League – said tributes will be paid to the Queen at grounds across the country when games in the second-tier Championship as well as League One and League Two resume from today.

A minute’s silence will be held before matches, with black armbands to be worn by players, flags to be flown at half-staff and the national anthem to be played in stadiums.

“With a national policing plan now in operation,” the EFL said, referring to the days leading up to the funeral, during which the queen’s coffin will lie in state in London, “the League and clubs will continue to work with forces in respect of any challenges that may emerge regarding policing of specific fixtures.”

The EFL said it will work on a “case-by-case basis.”

Before that, play in the non-professional leagues resumed yesterday, with football having completely stopped from Friday to Sunday – from the professional leagues all the way down to the grassroots. A Premier League game between Leeds and Nottingham Forest, scheduled for yesterday night, remained off to fall in line with the postponement of top-flight fixtures in the last round. 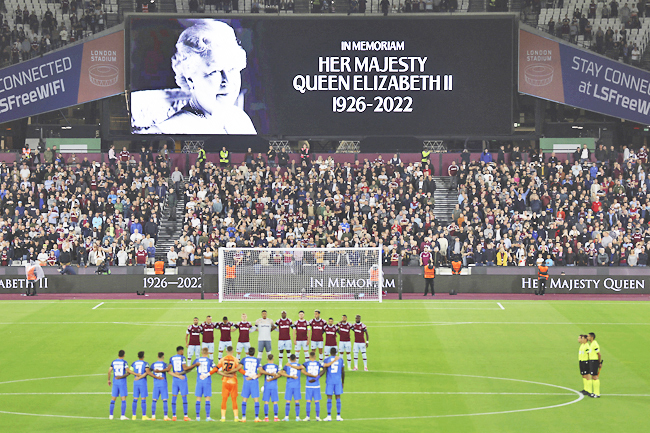