MONDOLIKO, INDONESIA (AP) – All the crops had died and the farmed fish had escaped their ponds. The only road to the village was flooded and the water just kept getting higher, said Asiyah, 38, who like many Indonesians uses only one name.

She knew that she had to leave her home on Java’s northern coast, just as many fellow villagers had done months earlier. So about two years ago, after agonising over the decision for months, she told her husband it was time to go and started to pack.

Java, home to some 145 million people and the Indonesian capital Jakarta, is the most populated island in the world. Scientists said parts of the island will be entirely lost to the sea in the coming years.

Much has been written about the sinking capital, which is being moved partially due to destructive flooding. Other parts of the country with persistent flooding have received less attention.

Some 300 miles from Jakarta, entire villages along the Java Sea are submerged in murky brown water. Experts said rising seas and stronger tides as a result of climate change are some of the causes. Gradual sinking of the land and development are also to blame.

Mondoliko, where Asiyah is from, is one of those villages. 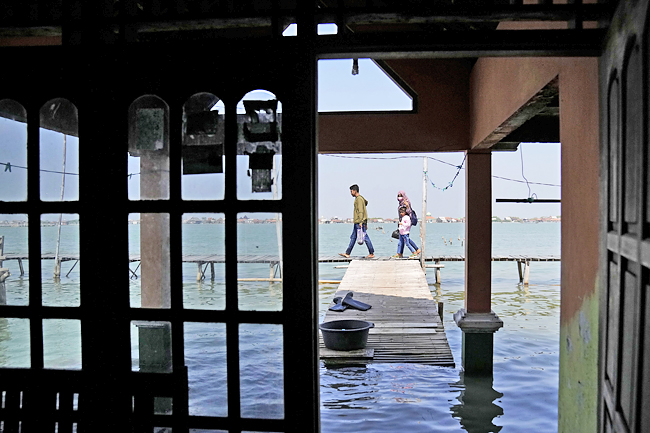 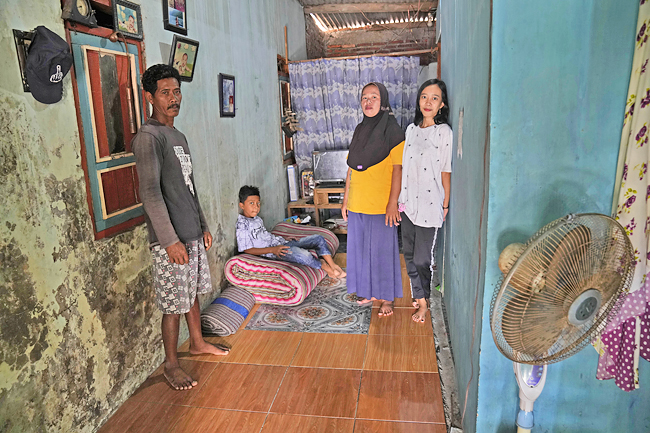 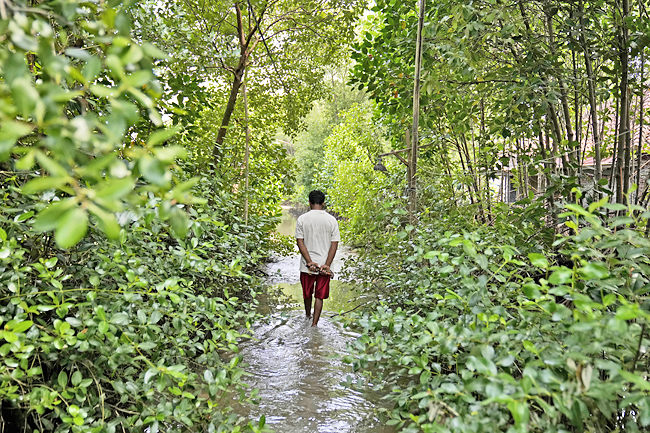 Asiyah smiles as she describes what Mondoliko was like when she was young: Lush green rice paddies, tall coconut trees and red chili bushes grew around the some 200 homes people lived in. She and other children would play in the local football field, watching snakes glide through the grass while butterflies flew through the air.

“Everyone had land,” she said. “We were all able to grow and have what we needed.”

But around 10 years ago, the water came – sporadically and a few inches high at first. Within a few years it became a constant presence. Unable to grow in salt water, the crops and plants all died. With no land left as the water got higher, the insects and animals disappeared.

Asiyah said she and other villagers adapted the best they could: Farmers swapped their crops for fish ponds; people used dirt or concrete to raise the floors of their homes above the water. Net fences were put in yards to catch the trash the tide would bring in.

For seven years Asiyah, her husband Aslori, 42, and their two children lived with the floods, the water getting higher every year. But they noticed changes as well: Neighbours were leaving their homes behind in search of drier land. The call to prayer at the village mosque went quiet. Even new fish ponds became futile, the water rising so high that the fish would jump over the nets.

She remembers the day she decided they had to leave her lifelong home. Her father, who lived with them, had been battling bone cancer and prostate issues, and some days he was so frail he couldn’t stand. Her son was getting bigger and faced an increasingly difficult, waterlogged commute to school over two miles away.

“I was worried when the road flooded – how can we go about our daily lives?” she remembers wondering to herself. “The kids can’t go to school or play with their friends…. We can’t live like this.”

The flood water getting higher, she told her husband that it was time to leave.

Early one morning in the pouring rain, Asiyah and Aslori loaded what items they could into their boat: pictures of their wedding and family, documents and a big plastic bowl filled with cooking supplies. She left her house for a final time, making the trip three miles away to Semarang, where she had found to rent an empty one-bedroom concrete apartment.

The first night in their new apartment Asiyah slept on the ground, trying to soothe her distraught son.

“I tried to make them understand that there was no other option. We can’t work and they can’t go to school if we stayed in Mondoliko,” she said. “It’s uninhabitable.”

Asiyah confesses that while she was comforting him, she wanted to go home, too. But even if she wanted to return, it would have been impossible – the road to the village had flooded.

Others from Mondoliko have abandoned their homes since then. When The Associated Press visited the village in November 2021, 11 homes were still occupied. By July 2022, that number dwindled to five, as the village continues to be swallowed by the sea.

Asiyah and her fellow villagers are just a few of the some 143 million people who are likely to be uprooted by rising seas, drought, searing temperatures and other climate catastrophes over the next 30 years, according to the United Nation’s (UN) Intergovernmental Panel on Climate Change report published this year.