ANN/THE STRAITS TIMES – The number of flood victims in Johor doubled to more than 4,000 yesterday afternoon as the Malaysian Meteorological Department (MetMalaysia) warned “dangerous-level” heavy rains will continue in Johor and Sabah until today.

MetMalaysia placed the highest level warning on areas in Johor including Mersing and Kota Tinggi, and Sabah’s Sandakan and Kudat.

The weather authority issued a mid-level “severe” warning on Pahang state, including Pekan and Rompin, until today.

The state disaster management committee in Johor said there are currently 4,207 flood evacuees at 45 relief centres across six districts, with Muar being the latest. 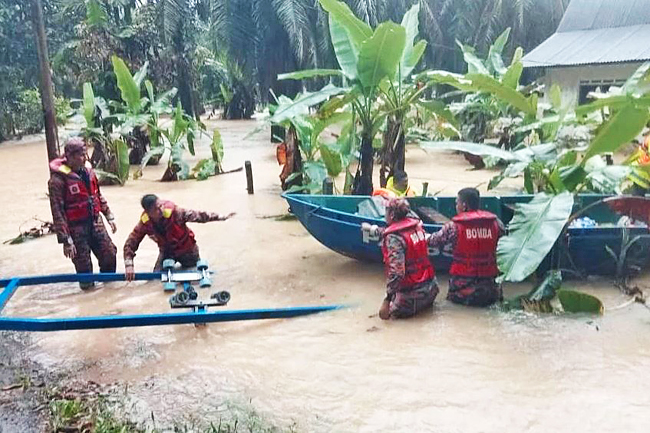 There are now 45 relief centres in operation, compared to 35 at 8am, and 16 on Tuesday night, it added.

At 8pm on Tuesday, 1,703 people from 469 families were displaced due to the floods, following continuous rainfall since Monday.

The relief centre with the highest number of evacuees is primary school SK Tenang Labis with 477 people from Kampung Tenang in Segamat.

There are three rivers that have reached the dangerous level (red), with six rivers reaching the warning level (orange).

In Labis, a town in Segamat, three people had a harrowing experience when their car crashed into a lake while it was raining. The incident took place at Jalan Impian on Tuesday.

Labis Fire and Rescue Department operations chief Inggai Bakau said the victims, aged between 13 and 23, were heading towards Segamat when the driver lost control of his car.

They suffered minor injuries and were treated at Hospital Segamat.

The Malaysian Meteorological Department issued an alert saying that continuous rain in Johor is expected to continue until yesterday night.