Sisah @ Isa bin Haji Mustapha always looks back at the year 1977 with fond memories. It was the year he learnt pencak silat from his father Haji Mustapha bin Arsad, a silat instructor in Kampong Menengah, Tutong.

His father taught his charges in Kampong Pengkalan Tangsi, Jalan Layong Tutong where Sisah absorbed the practice from several martial arts experts to advance his skills.

A full-body fighting form incorporating strikes, grappling and throwing in addition to weaponry, pencak silat uses every part of the body and the subject to attack.

Tenaga dalam (inner power) and getaran (vibration) are the two characteristics of pencak silat. The development of inner power is an important aspect of the training and the vibration helps the pesilat (silat practitioner) to perceive their surroundings without the use of eyesight. 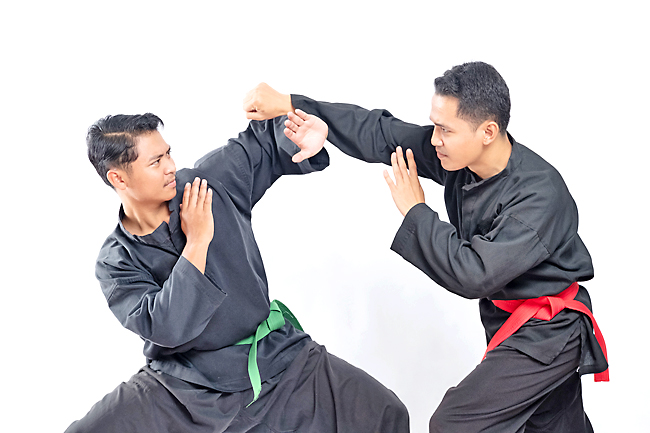 “Those interested in pencak silat need to train from registered silat associations under the Brunei Darussalam Pencak Silat Federation (PERSIB). This is to ensure that the martial art, being a part of our culture, will not disappear,” he said, adding “learning and mastering the techniques are vital, as we cannot anticipate how the enemy will attack us”.

Pencak silat, aside from being part of the nation’s heritage, helps an individual to become disciplined, humble and respectful.

It also establishes friendly ties between the locals and foreigners, particularly those who are passionate about pencak silat.

Sisah sees a declining trend in the interest to take up silat, compared to the 80s. Nevertheless, he said, “we at PERSIB, along with other silat bodies, are working hard to revive the glory days of pencak silat“.

He added, “I call on the community involved in pencak silat to train for local competitions. If possible, participate in the international category as it puts the country’s practitioners on the world stage”.