BANGKOK (XINHUA) – Thirteen villagers have been reportedly killed due to flash floods and torrential waters in Nakhon Si Thammarat province in southern Thailand.

According to a report of the Department of Disaster Prevention and Mitigation (DDPM) released yesterday, the 13 villagers drowned due to flash floods and torrential waters, following heavy downpours in Nakhon Si Thammarat over the last few days.

Six southern Thai provinces have been severely flooded by continual, heavy rainstorms since late last month, according to the DDPM report.

A total of 321,057 households in 2,680 villages in 66 districts of the six provinces have been considerably affected while authorities are providing emergency relief measures. 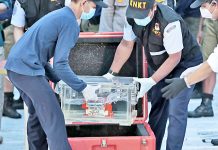