Five mystery books to cozy up with

THE WASHINGTON POST – As summer gives way to fall (if not cooler weather), it’s the perfect time to start thinking about cozy mysteries – books that feature a memorable investigator who must solve a crime that’s more intriguing than gruesome. Here are five that fit the bill; several are also set in locales that add a sense of escape amid the drama.

GIVE UNTO OTHERS BY DONNA LEON

When a childhood acquaintance asks Commissario Guido Brunetti to look into her son-in-law’s financial affairs, he reluctantly agrees. The investigation shakes Brunetti’s faith in himself as a detective. In the newest book in Leon’s series set in Venice, Brunetti is joined by a trio of his closest colleagues as they try to untangle a web of family secrets and financial misdeeds while keeping the inquiry off the official books.

The book is steeped in a grey, murky atmosphere as Leon describes the pandemic-related devastation of Venice’s tourist-dependent economy – a devastation that mirrors Brunetti’s inner turmoil as he tries to determine where his loyalty lies in the increasingly disturbing – and puzzling – investigation. 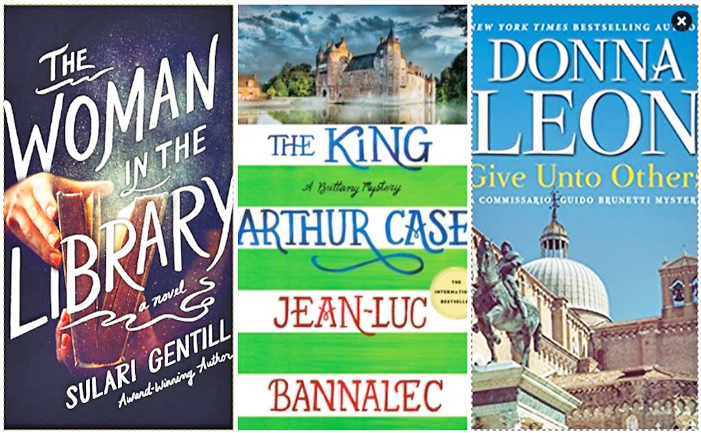 THE LOCKED ROOM BY ELLY GRIFFITHS

When sorting through her deceased mother’s belongings, Ruth Galloway is puzzled to find an old photo dated five years before Ruth’s birth of the cottage in Norfolk, England, where she now lives with her daughter Kate. Ruth’s mother had never indicated any connection to the cottage, so Ruth vows to find out more, even as the world is suddenly turned upside down by the pandemic and subsequent lockdown.

Meanwhile, Detective Chief Inspector Harry Nelson, Kate’s father, is trying to figure out links among an unusual number of apparent suicides; as he and his team investigate, they discover connections to a murderer who may endanger Ruth and Kate.

In the latest in her popular Ruth Galloway series, Griffiths delivers a satisfyingly complicated mystery plus a heartfelt look at the unsettling mix of panic and boredom in the pandemic’s early days.

VI “Vic” Warshawski’s latest case begins during the pandemic when she discovers a teenage girl hiding in the rocks along Lake Michigan.

Badly injured, the girl is only able to say one word before losing consciousness. But that’s enough for Vic to go on as she delves into who hurt the girl and why. In her hunt, Vic uncovers long-buried family secrets that make her a target for a powerful, brutal cop determined to keep her off his turf. Once again, Paretsky demonstrates the staying power of her iconic character as well as her own deft storytelling skills.

What begins as a lighthearted office outing to Brocéliande Forest in Brittany, France, suddenly becomes one of Commissaire Georges Dupin’s most violent murder cases in The King Arthur Case, the seventh book in Bannalec’s best-selling Brittany Mystery series. In this latest volume, Bannalec plunges the cranky, brilliant Dupin into an apparent bloodletting among top academics studying the legend of King Arthur and the Round Table.

As the number of murders climbs, Dupin finds multiple motives among the scholarly suspects, all of whom are being frustratingly obtuse with investigators. Bannalec compresses the action into a little more than two days and incorporates humour into his story, something too often missing in mysteries. His other trademark is the way he lets his love and knowledge of Brittany shine through in his books, especially in his descriptions of the region’s wildly unpredictable weather and sublime beauty.

THE WOMAN IN THE LIBRARY BY SULARI GENTILL

With its story-within-a-story framework and a premise that offers an intriguing twist on a locked-room puzzle, The Woman in the Library will readily appeal to classic-mystery lovers.

Gentill, an award-winning mystery writer in her native Australia, sets this book in the United States as she tells how a friendship quickly develops among four strangers sitting at the same table in the Boston Public Library’s opulent Bates Hall reading room when a woman’s scream suddenly pierces the space’s hushed serenity. The friendship among the four shifts and changes as secrets are uncovered and it becomes clear one of them is a murderer. Gentill boosts dramatic tension by interlacing this tale with emails sent by an increasingly psychotic aspiring writer to the woman who is writing the story of the four strangers who become friends. If this sounds confusing, it isn’t; instead, Gentill’s complex plot will keep readers guessing to the very end.