THE WASHINGTON POST – Escape to California, Lebanon, Connecticut, Provence and not-so-merry England in these five first-rate new mysteries and thrillers. Sure, readers will find plenty of danger, intrigue and suspense in these pages, but it’s all at a comfortably safe distance.

THE ANATOMY OF DESIRE BY LR DORN

Among the career possibilities my high school guidance counselor never mentioned to me some years back was “social media influencer.” This peculiar phenomenon is at the centre of LR Dorn’s spicy update of Theodore Dreiser’s 1925 classic, An American Tragedy.

In the original, social-climbing Clyde Griffiths is accused of drowning his pregnant girlfriend so he can marry a socialite.

In the version by Dorn – pseudonym of Los Angeles husband-and-wife screenwriting team Matt Dorff and Suzanne Dunn – “fit-fluencer” Cleo Ray is charged with killing her lover so she can move up the social scale with male “sports brand ambassador” Sandy Finch. The novel is written in the form of a docuseries like Serial, and like that cool potboiler, The Anatomy of Desire cruises along with nary a bump in the road. (Morrow, May 11) 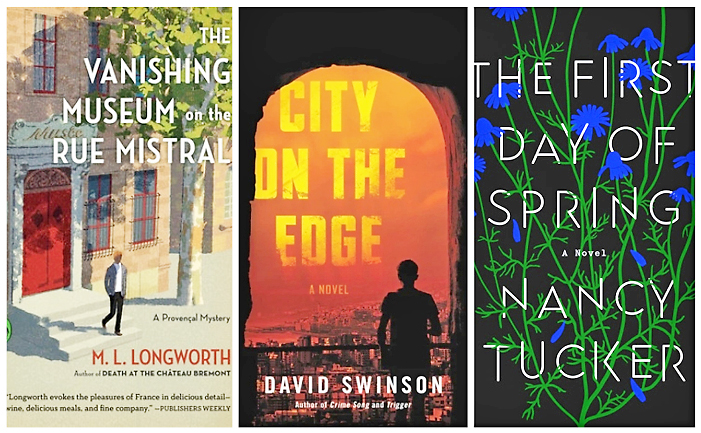 CITY ON THE EDGE BY DAVID SWINSON

Graham Sanderson, the young narrator of David Swinson’s tense, beautifully poised thriller set in pre-civil war 1973 Beirut, witnesses a fatal stabbing next to the “fort” he and his US Embassy-kid buddies carved out near their apartment complex.

Because the boys had been forbidden to be up on that scrubby hillside, Graham can’t tell his stern CIA agent dad about the murder for fear of being grounded.

Swinson, a retired DC police detective and author of three Frank Marr PI novels, deftly explores both Graham’s emotional state and a family and society on the brink.

His entirely plausible, theatrical ending could be right out of Chekhov. (Mulholland, May 25)

FIND YOU FIRST BY LINWOOD BARCLAY

Prolific novelist Linwood Barclay delivers a clever twist on an old trope: heirs knocking off other heirs to inflate their own inheritance. When rich, unmarried Connecticut tech entrepreneur Miles Cookson is diagnosed with incurable Huntington’s disease, he sets out to locate his nine widely scattered and mostly appealing 20-year-old children – all the result of sperm donation.

Cookson wants to warn them that they might carry the Huntington’s gene and set them up financially. Then, the nine start to vanish, their dwellings reeking inexplicably of bleach.

Science meets megalomania in this up-to-date nifty entertainment. (Morrow, May 4)

THE FIRST DAY OF SPRING BY NANCY TUCKER

I killed a little boy today is the hair-raising first line of British psychologist Nancy Tucker’s first novel (she has also written two non-fiction books), and it’s a stunning debut.

Eight-year-old Chrissie Banks’ “Da” is a loving drunk who’s rarely around, and her “Mam” is a mean drunk methodically starving her daughter.

Strangling a two-year-old is Chrissie’s way to “feel like I had all the power in the world”.

The novel alternates between the sardonic, off-kilter voice of young Chrissie and the anguished voice of grown-up “Julia” (her post-prison moniker), who’s the mother of a five-year-old.

You bet. Heart-rending? From beginning to end. (Riverhead,May 18)

THE VANISHING MUSEUM ON THE RUE MISTRAL BY ML LONGWORTH

Murder by bludgeoning and the theft of the entire contents of a small museum in Aix-en-Provence are almost beside the point in ML Longworth’s sprightly ninth Provencal mystery.

The charm here is the locale – vaccinated readers will want to book their flights – and enjoying the suave company of examining magistrate Antoine Verlaque and his wife, Marine Bonnet.

She is blissfully pregnant while he’s puzzling over who stole Napoleon’s dessert plates and other odd items.

That’s whenever the two of them aren’t enjoying a blanquette de veau prepared from some “organic happy veal” (mais alors!) or a drink with a hint of “peaches, but also a sea breeze” – which is an apt description for the entire novel. (Penguin, April 13)