Boustead Sdn Bhd, the sole distributor of Suzuki in the country yesterday presented prizes to the winners of the Longest Dead Hang and 200 Skips in 60 Seconds events that took place during the recent Fitness Festival Event at Peak Performance, Berakas.

Collaborating with Fitfest.BN as one of the main sponsors of the Fitness Festival, Suzuki Brunei held a roadshow showcasing two Suzuki vehicles – Suzuki Swift Sport and Jimny – along with several other models available for test-drives.

In addition, two challenging activities – the Longest Dead Hang, a contest to achieve the longest duration of hanging on a bar, and 200 Skips in 60 Seconds, a contest to find the first person to break a record of 200 skips using a speed rope in 60 seconds were organised for public participation.

Airul bin Jamaludin was the first to achieve the 200 Skips in 60 Seconds challenge, bringing home a prize of six-month’s subscription at Peak Performance and gift vouchers.

Meanwhile, Muhammad Isa Dennis won a prize of three-month’s subscription at Peak Performance and gift vouchers for winning the Longest Dead Hang challenge with the record at three minutes and one second, besting the rest of the contestants by over 30 seconds.

Suzuki Brunei hoped to build a lastingrelationship with the fitness community by supporting future events aimed at promoting healthy lifestyle and well-being. 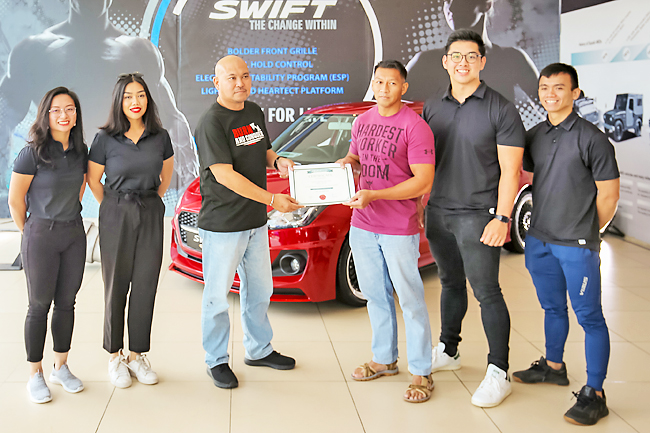