A Filipino woman and a local man converted to Islam in a ceremony held at the VP Room of The Rizqun International Hotel yesterday.

Arlene Alterado Navaja, 48, and Remmy anak Seliong, 24, recited the Syahadah in the presence of officers from the Dakwah Development Section of the Islamic Da’wah Centre (PDI).

Navaja, who took the Muslim name of Fatimah Az-Zahra Navaja binti Abdullah said, “I am very happy and thankful to Allah the Almighty that I am now a Muslim. I plan to deepen my knowledge of this beautiful faith such as the daily obligations, the recitation of Doa and the pillars of Islam.”

Meanwhile, Remmy – who is now known as Muhammad Remmy Seliong bin Abdullah – said that the decision to convert was reached after a spiritual experience, which is very personal to him.

“At last, I was able to recite the Syahadah and call myself a Muslim. It’s a truly amazing feeling,” he told the Weekend Bulletin.

The conversion ceremony was further enlivened with a Dikir Marhaban and the sprinkling of scented flowers on the converts, before concluding with a Doa.

The two converts also received gifts from the guest of honour.

Brunei Darussalam has witnessed an increase in new Muslim converts, with 349 in 2019 and 436 in 2020. The total number of Islamic conversions recorded since January this year is 46. 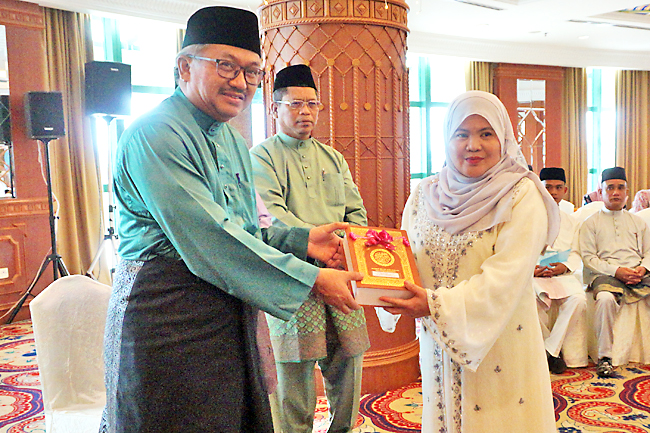