CNA/NEW YORK TIMES – Mirrors lie. They reverse things. That face you see in the bathroom every morning, in your makeup compact: That is “opposite you” – the inverse of the face everyone else sees. We all know this, in theory.

And yet, for the past two years or so, this simple fact has riveted and sometimes deeply upset many people (especially young ones) trying out the facial-symmetry filters on social media.

Some of these filters invert the mirror’s reflection, revealing images of one’s face as others perceive it, unnerving many users by casting new light on all the imperfections to which our familiar mirrored reflections inure, or even blind us: The uneven hairline, the crooked mouth, the not perfectly level eyes.

These all spring sharply into focus when reversed. For these reasons, confronting one’s “flipped” face can feel a bit alienating (not unlike hearing your own voice on tape).

Other filters startle in a different way, by creating symmetry, aligning features and smoothing irregularities, or presenting perfected yet deeply unfamiliar images via a kind of real-time Photoshop or virtual plastic surgery. 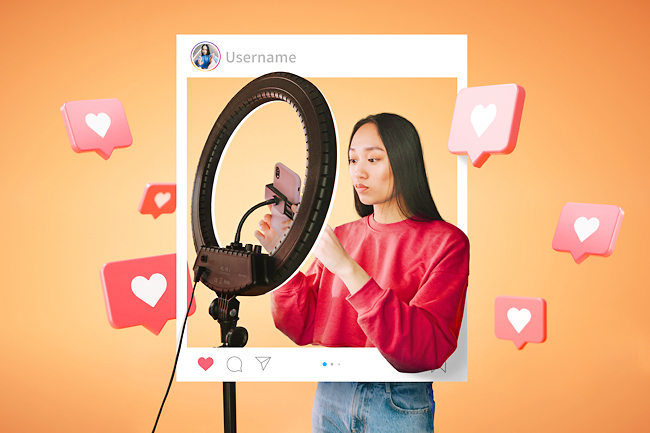 The filters have become enormously popular. Every few months, a new face-symmetry-focussed trend seems to take hold on TikTok, set to audio from music (like Olivia Rodrigo’s Deja Vu) or movies.

Scroll through the pages and pages of users trying these filters, and you’ll find a range of reactions: Some people laugh at what looks like a warped fun house reflection; others appear to feel real shock and despair at the unfamiliar face on their phone screen.

One commonly used symmetry effect, listed on the app as one of TikTok’s own Creative Effects, is Inverted.

According to TikTok’s public view counts, the Inverted effect has been used in nearly 10 million videos. On the hashtag page for #Inverted, a description asks users: “Are you #Inverted? Use our Creative Effect and find out.”

The algorithm may favour symmetry filter use as well. Whether it’s algorithmic, pure human interest or some mixture of the two, videos tagged #Inverted have netted a whopping 23 billion views on the app.

What propels this craze in this moment? The strangeness of pandemic times may be partly responsible.

In the past two years, we’ve had both way too much virtual “face time” and way too little normal time with people face to face.

In private, we’ve stared for hours at our own and other people’s faces, with all our flaws, on videoconferencing screens. (The rise in pandemic-era plastic surgery has been called the “Zoom boom”).

And in public, masks have deprived us of the healthy human experience of interacting with the faces all around us. This alone may explain a heightened interest in face-scrutinising apps.

But motivations well beyond the pandemic also drive this trend.

There’s the modern amusement of going viral on social media; the ancient and eternal fascination with beauty and how to assess it; the lighthearted, carnivalesque fun of playing around with mirror images; and the deep desire to see ourselves as others see us.

Twenty-year-old student in Colorado Leslie Lizette Cartier struck social media gold with her facial-symmetry TikTok, which has about 11 million views.

Her choice for musical accompaniment? Quasimodo’s theme song from Disney’s The Hunchback of Notre Dame.

The song had been paired with the symmetry filters before and Cartier latched on to the trend. Its lyrics include: “You are deformed/And you are ugly/And these are the crimes for which the world shows little pity”. Despite the song’s message, Cartier said she was untroubled by the unevenness the filter revealed in her face.

“Growing up,” she said, “I’ve always kind of poked fun at the fact that one side of my face is just very strongly defined and the other side is a little softer. When I tried the symmetry filter, I was pretty much expecting it to be that way. I made the video with the intention of making the joke.”

Still, when her video went viral, many viewers were upset, by both the visuals and the audio, suggesting it encouraged mockery of those with disfigurements.

“They were saying this filter, this entire trend, is very harmful,” she said. “They were saying: ‘You’re making fun. Imagine people who actually do look bad, like, this could hurt them’.”

Journalists have been documenting this phenomenon, addressing the deleterious mental health effects of seeing yourself as others see you and offering ways to cope with the new self-knowledge. Many articles treat the issue as a kind of trauma, another example of the bodily insecurity the Internet provokes, which some call “filter dysmorphia”.

That said, the current obsession with symmetry may emerge from something older and deeper than any of these triggers.

The human fascination with symmetry is an ancient phenomenon, with vast cultural and biological implications, which helps explain the strong emotions being expressed on social media.

Beauty has always invited quantification and assessment. Aristotle believed that “the chief forms of beauty are order and symmetry”.

The concept of symmetry helps us see connections between the design of our human lives and the entire rest of creation, a link between human beauty and the intricate workings of nature, biology, mathematics, physics.

Symmetry is even critical to modern physics. As chair of astrophysics at the American Museum of Natural History Mordecai-Mark Mac Low explained in an email: “Even Einstein’s theories of special and general relativity rely on symmetry, with respect to relative velocity or to the very bending of space-time”.

And so, some of the social media obsession with symmetry may actually be surging up from an ancient imperative that once privileged symmetry (and maybe still does).

Some scientists who study beauty have long maintained this. In her 1999 book, Survival Of The Prettiest, Harvard psychology professor Nancy Etcoff argues that regardless of culture or ethnicity, all human beings love and are drawn to beauty.

“The more symmetry a body has, the more attractive it is,” she said in an interview. “We find something ‘wrong’ with even slight asymmetries.” While styles of beauty change over time, she said, many people “want to look at something close to perfect or without obvious flaws”.

Is it unfair or wrong to dissect beauty in this way? Is it un-feminist (given how much more time and energy women tend to devote to their appearance)?

Maybe. But for Prof Etcoff, cultural interpretations are beside the point. “Some things,” she said, are instinctual. “We’re capable of rising above our instinct, but it’s part of human nature.” DNA, she noted, was “the original symmetry producer”.

Given this, it’s unsurprising that those who work in beauty culture are often as interested in symmetry as Aristotle and Vitruvius ever were.

According to plastic surgeon in New York City Dr Stafford Broumand: “Most people are asymmetric. There are some models who have incredible facial symmetry, and when you see them, it takes your breath away. Why are they so strikingly beautiful? That’s part of it, that striking symmetry.” (Which models in particular? Broumand demurred. “They might even be my patients.”)

But isn’t it rather soulless to reduce our singular, precious faces to equations and ratios? What about the charm of imperfection? Drew Barrymore’s adorably crooked smile? Cindy Crawford’s mole?

“All things are literally better, lovelier, and more beloved for the imperfections which have been divinely appointed,” 19th-Century British thinker John Ruskin wrote in The Stones Of Venice.

As Prof Etcoff acknowledged, “the oddity, the rarity, the uniqueness of a person can be extremely attractive”.

We can find corroboration for this in an art form dating to 15th-Century Japan.

The Greeks may have prized perfection, but the ancient Japanese tradition of kintsugi (meaning “joining with gold”) pursued quite different ideals.

Kintsugi, which grew in popularity in the 17th-Century, is the craft of repairing broken ceramics by filling a crack with lacquer and then highlighting the “scar” with powdered gold, platinum or silver.

“Kintsugi is an aesthetic principle that celebrates breakage and imperfection rather than concealing or rejecting it,” said professor of Asian art history at Parsons School of Design Petya Andreeva.

“It’s derived from the Buddhist doctrine of wabi-sabi, which emphasises the impermanence of the material world, as well as the transience of the human experience. The wabi-sabi aesthetic advocates for rough or uneven finishes, and asymmetry.”

Contemplating kintsugi may not offer immediate comfort to the distressed young people on social media, or to any of us who are weary of our own faces on video chats.

But it does offer valuable perspective, especially considered in light of philosophies that claim we have “natural” or instinctual needs for symmetry. At heart, these are not so much divergent views as they are two ways of looking at one phenomenon.

Whether you love and seek symmetry, or revere and celebrate its absence, you are seeking some kind of harmony in the face of rupture or conflict. And seeking to make sense of the world and its images is, in fact, a noble quest with a long history.