PARIS (AFP) – Roger Federer (pic below; AFP) could end his French Open career which has stretched over four decades with an injury-enforced withdrawal yesterday as the 39-year-old rests his weary bones for an assault on his primary objective, a ninth Wimbledon title.

The 20-time Grand Slam title winner, who will be 40 in two months’ time, battled over three and a half hours until 12:45 yesterday morning to reach the last 16 in Paris.

He is due back on court today to tackle Matteo Berrettini for a place in the quarter-finals.

However, having undergone two knee surgeries in 2020, the Swiss star admitted there are doubts he’ll make it.

“I don’t know if I am going to play,” said Federer who was always likely to be playing his last French Open.

“I have to decide whether or not to continue. Is it too risky to keep putting pressure on the knee? Is it a good time to rest? Every match I have to reassess the situation and see the next morning in what state I wake up and how my knee is doing. 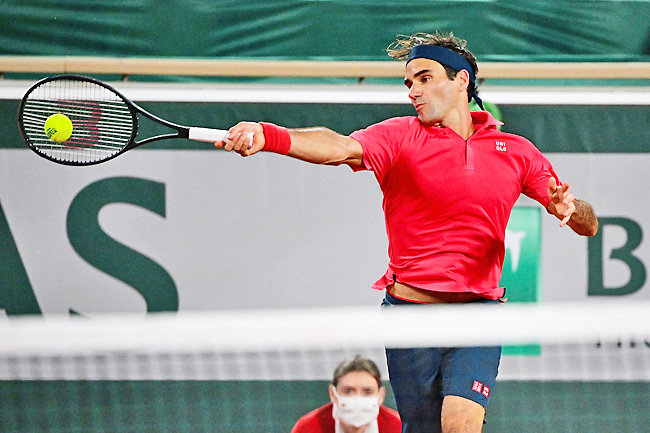 “It may be even more true after a match as long as the one tonight.”

Due to a government-imposed COVID-19 curfew, Court Philippe Chatrier was devoid of fans and atmosphere.

Federer is playing only his third tournament since last year’s Australian Open and has always said Wimbledon is his main goal.

He is chasing a ninth title at Wimbledon which starts on June 28.

He is also scheduled to play the warm-up grass court tournament in Halle beginning on June 14, the day after the French Open ends.

Federer made his Roland Garros debut in 1999 and was champion in 2009.