DOHA (AFP) – Roger Federer (pic below, AP) said he “couldn’t care less about the outcome” after winning his first match in over a year on Wednesday night as he returned from injury to beat Britain’s Dan Evans at the Qatar Open.

Federer, 39, who underwent two knee surgeries in 2020, said “it felt great to be out there again… it will give me a lot of answers”.

The 20-time Grand Slam title winner had not played a match since a semi-final defeat by Novak Djokovic at the Australian Open in January 2020 – 405 days ago – and acknowledged it was unusual for a player of his age to return after injury.

“I was very happy with how I was able to handle the tough moments, I didn’t think my game started to wobble,” he said.

Federer joked with the umpire at the coin toss about the rules of the sport during COVID-19, having not played since the ATP Tour was suspended last year due to the pandemic.

“I tend to forget a lot of things… like I’d ask for the towel and they couldn’t bring it to me because of the (coronavirus) rules,” he said after. 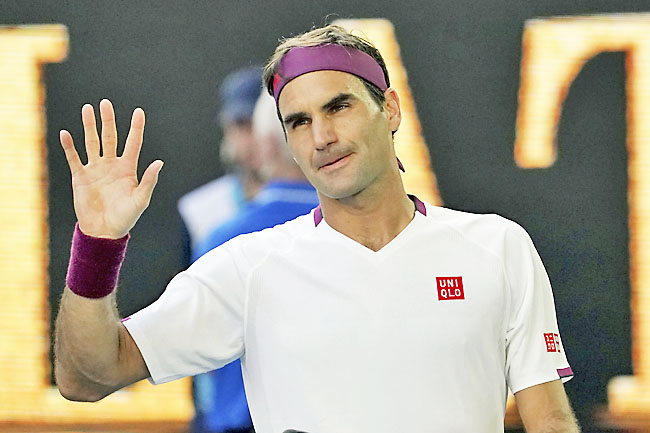 “It feels like I’ve been away longer than I have.”

Federer had to battle on Wednesday, saving a set point in the opener against a player who was a recent training partner.

“Dan was a tough first round – the lucky thing was I’d practised with him for the last few weeks,” Federer said.

“I knew I had to come forward more and come to the net and take chances and obviously that stresses the body more. I was really explosive actually.”

Federer received a rapturous welcome from the 20 per cent-capacity crowd at Doha’s Khalifa Tennis Complex, beaming back at fans, some of whom brandished portraits of the Swiss star while others waved his national colours.

Evans, 30, said after the match “it was clear he’d been off but (he) showed a lot of glimpses of why he’s so good”.

Djokovic has also taken Federer’s record for weeks at number one with the Serb moving to 311 weeks in total on Monday.

Federer has insisted his recovery from knee surgery was “completely under control” ahead of his return to competitive tennis.

“It’s been a long and tough road for me,” he said on Wednesday. “To come back at my age is not very simple.”

Federer described himself as an old school guy as he set out his approach to recovery.

“I did one ice bath and I didn’t like it,” he said with a laugh.

“I don’t do painkillers for fun, I don’t like to take them if I don’t have to – I haven’t tonight, I haven’t taken them for nine months.

“(Now) I’ll grab some food, stretch, take a shower… a massage and sleep in and warm up properly tomorrow.”

Federer will turn 40 in August and has said that he hopes to be back to “100 per cent” for Wimbledon in June but had not taken decisions on tournaments before then or the Tokyo Olympics.

Federer is an eight-time Wimbledon winner but has yet to win a singles gold at the Olympics.