The price of leafy vegetables such as sawi has increased while tomatoes will be hard to cultivate in wet conditions. However for fruits, the price will not be affected by the unsettled weather especially seasonal ones like durian, said a farmer from Eco Nadi Agrobiz Farm in the Tutong District.

“Yields have been dropping due to the current wet spell,” he said, adding that he grows leafy vegetables like sawi, terong (brinjal), kacang panjang (long beans) and tomatoes at his farm.

Meanwhile, another farmer from Bioprop Sdn Bhd said normally, during the wet season, the price of vegetables will increase, especially those who grow their vegetables in flood prone areas.

Some farmers tend not to grow as they don’t want to take the risk of having their farms flooded, thus skipping the season altogether.

“But I grow high-value vegetables, so I maintain the price,” he said. 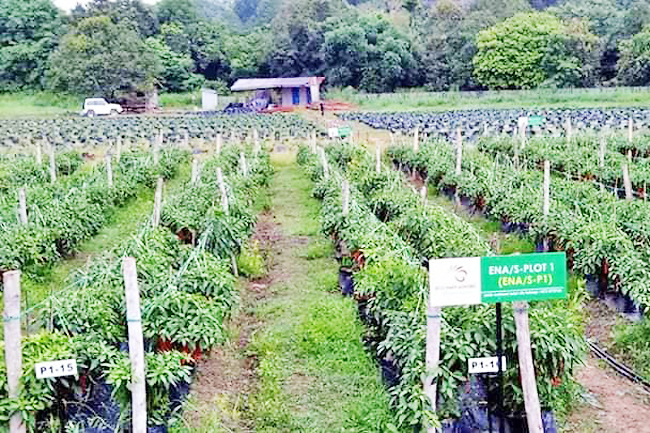 Another farmer said, “Anything that is green needs sunlight. If the rain persists, its growth will slow down.

“These vegetables are prone to infections.”

He called on the authorities to set up more greenhouses to shield crops from unpredictable weather conditions.

“If harvests are affected by the monsoon due to persistant rain for the next two weeks, surely the price of vegetables will go up,” he said.

The Brunei Darussalam Meteorological Department yesterday said the nation is currently in the first phase of the northeast monsoon, where generally unsettled weather conditions with showers and thunderstorms, heavy at times, are expected especially at night until early morning.