Far from the ‘Hollywood smile’

ISTANBUL (AFP) – Briton Rida Azeem knew her dental trip to Turkey had gone badly wrong the second she took off her mask.

“My husband said, ‘What have they done to you? Your face is all sunk’.

“I had big gaps underneath my gums and you could see all the metal bits (of the implants). It was done so badly it was unbelievable,” the engineer from Manchester told AFP

“Originally they were going to do five implants,” said Azeem. But, when the treatment was about to start, the dentists told her they would “have to remove all your teeth”.

“They looked professional,” said the 42-year-old, who now has to wear false teeth.

Attracted by the promise of the perfect smile at an unbeatable price, 150,000 to 250,000 foreign patients flock to Turkey every year, according to the Turkish Dentists’ Association (TDB), making it one of the world’s main dental tourism destinations alongside Hungary, Thailand and Dubai.

But the “Hollywood smile” sold by clinics in Istanbul, Izmir or Antalya often involves trimming or even extracting healthy teeth, sometimes taking all of them out. 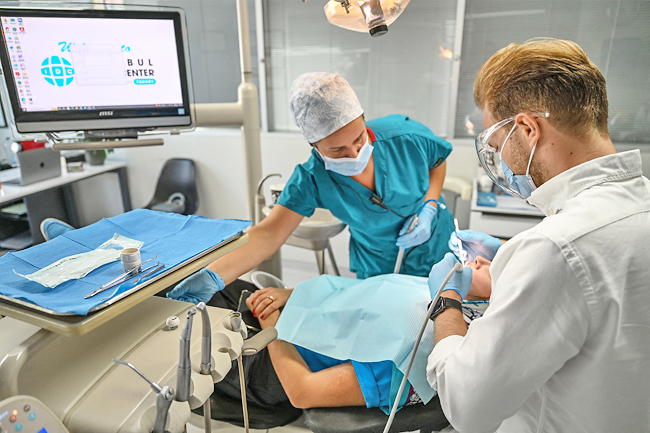 “Many dental clinics in Turkey treat teeth that don’t need treatment,” said the head of an Istanbul clinic, who did not want to be named, told AFP

“They put veneers on teeth that only need bleaching or lightening, sometimes they even put full crowns.”

Azeem is far from the only foreign patient to have been left disfigured or in chronic pain.

Alana Boone, a 23-year-old Belgian woman who travelled to Antalya in July 2021, was one of the five foreigners AFP talked to who suffered serious complications.

The 28 crowns she had done seemed fine, but only on the surface. They were “placed too deep. Now I have inflammation and pain every day… at times it is very intense”, she said.

“The only solution would be to remove everything but dentists do not know what they are going to find.”

Marie, a French nurse, felt she needed work on her lower teeth to boost her confidence after going through a separation. “I wanted to look more attractive,” she said.

But a Turkish dentist persuaded her to put crowns on her top ones too, 28 in total.

“I had very healthy teeth. I began to regret it all when they began to file my teeth,” she said.

“After about a month, the problems started: teeth began to move, and food began to get stuck between them… My breath is so awful that even mouthwash” doesn’t help, said the nurse.

The British Dental Association has sounded the alarm about the phenomenon, warning of the “considerable risks… of cut-price treatment” abroad, warning of many cases of infections and “ill-fitting crowns and implants that fell out”.

Patrick Solera, of the French dentists’ union, said he was horrified to see influencers going to Turkey “to have their teeth trimmed”.

“You do not put a crown on a tooth that’s a little yellow, and trimming a healthy tooth to put a crown amounts to mutilation. In France, they lock you up for that.”

But Tarik Ismen, of the TBD, insisted that Turkish dentists were only responding to a need.

“Some people want to look like Hollywood stars and have a bright, fluorescent smile. If Turkish dentists are not going to do it for them, there are Albanian or Polish ones who will do it,” he told AFP.

He said that botched surgery rates of “three to five per cent are acceptable… and could happen anywhere”, adding that not one of his association’s 40,000 dentists had been struck off. “Turkish dentists are the best and the cheapest in the world,” declared Turker Sandalli, who pioneered dental tourism in Turkey 20 years ago.

He boasted that “not one tooth has been extracted in 12 years” in his Istanbul clinic, where 99 per cent of the clientele are foreigners.

“But..and I am sad to tell you this, 90 per cent of Turkish clinics go for cheap dentistry,” he said, accusing “2,000 to 3,000” illegal operators of blackening the industry.

Head of the Istanbul Chamber of Dentists, Berna Aytac accused medical tourism agencies of “dragging down the quality of care”.

Almost all foreign clients that that AFP talked to travelled to Turkey with all-inclusive deals booked through agencies that took in their transport, treatment and accommodation.

More than 450 medical tourism agencies are licensed by the Turkish Health Ministry, and some use misleading material to attract customers.

Among them is Sule Dental which presents itself as having its own “dental clinic” even though it is officially only an intermediary.

Sule Dental uses photos and glowing endorsements from former clients with beaming smiles on its Internet homepage. One woman calls the staff “Awesome!!!!”, while another praises its “very caring” doctors.

But the pictures are stock photos taken from an image bank. AFP found the same photos being used to publicise a clinic in Antalya called Perla Dental as well as a Tunisian medical agency.

On Instagram, where Sule Dental has 390,000 followers, glowing videos from former patients include two from Britons who told AFP that they had suffered complications.

One was left with “root canal damage. I started to bleed a lot when I was brushing my teeth”, he said.

The influencer, who did not want to be named, travelled to Turkey as part of a partnership to publicise the clinic and has not told his followers of his problems for fear of being sued.

Neither Sule Dental nor the Turkish Health Ministry responded to AFP requests for comment.

For the victims, legal redress is scant and costly once they return home. “When a patient returns from Turkey or elsewhere with work already done, dentists refuse to touch them because you become responsible,” said the French dentists’ leader Solera.

Just to repair the damage, Rida Azeem and Alana Boone have been quoted treatment costing USD30,000, three to four times what they paid to have their work done in Turkey.

Through dogged efforts, the British engineer managed to claw back USD3,000 from the Istanbul clinic that disfigured her – not enough even for the dentures she had made in Pakistan to recover “90 per cent” of her smile.

The Turkish dentist did offer to treat her if she returned, “but I was too afraid”, she said. The clinic did not reply to AFP requests for comment.

“If you want treatment, find your practitioner yourself, talk to them directly and don’t go without an online consultation,” said Turkish lawyer Burcu Holmgren from London Legal International.

She said she has helped more than a dozen patients who have had problems with Turkish dental care get redress.

“The process is very slow – it takes about two years,” she said, adding that she has won “96 per cent” of her cases. Most cases end up with a financial settlement, without a dentist being struck off, she admitted.