THE WASHINGTON POST – What happened to Mami’s cousin Natasha in the Dominican Republic 50 years ago? Twelve-year-old Pilar is determined to discover the long-hidden truth. She plans to make a documentary about Natasha, who disappeared, like many others, during the brutal dictatorship of Rafael Trujillo.

But Mami and Abuela won’t cooperate. They answer her questions as they always have, with tears and silence. Pilar knows only that they fled to the United States (US) soon after Natasha’s disappearance and settled in Chicago, Illinois.

Pilar is smart and persistent. If her family won’t talk, maybe others will. She travels crosstown to speak with a professor who researches these disappearances. When Pilar enters his empty office, though, something strange happens. She is sucked through a file folder – and dropped onto a beach. The beach of a magical tropical island called Zafa.

Before you can say Evil Coconut Trolls, Pilar is being chased by a whole pack of the snarling creatures. Luckily, she is rescued by Carmen, a strong, quick-thinking teen with backward feet. The island is also inhabited by shape-shifters, demons and a powerful fiend named El Cuco. Pilar recognises them from abuela’s tales.

The island also has a heavily secured prison, La Blanca. Perhaps Natasha is jailed there, along with others who vanished during the Trujillo regime. 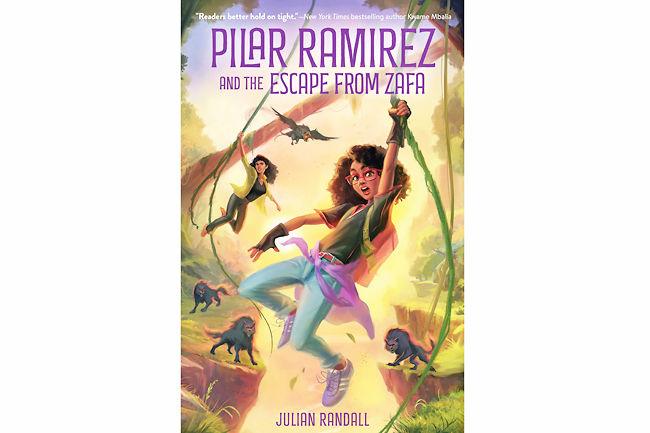 But how can Pilar, Carmen and their magical allies get close to the prison? For many years, these allies have battled El Cuco’s forces – and they’re losing. Leaders have been crushed, cities destroyed. The allies’ magic is waning, and El Cuco grows stronger.

As the danger mounts, Pilar receives a crash course in combat from a cranky bruja or witch. She learns about the island’s protective black sand and how to safeguard stories and memory.

Even with her new friends, skills and knowledge, though, Pilar can’t discover the answer to one very important question: How will she get home?

Growing up in Chicago, the author, Julian Randall, had lots of questions about the Trujillo dictatorship and his ancestors in the Dominican Republic. He wanted to write a high-stakes novel that his young self – and today’s readers, too – might have learned from and enjoyed.

In Tristan Strong Punches a Hole in the Sky (ages eight to 12) by Kwame Mbalia, seventh-grader Tristan teams up with African American folk heroes to convince a West African god to help mend a dangerous tear in the world. Freddie and his Filipino American family have long been plagued by bad luck in Freddie vs the Family Curse (ages eight to 12) by Tracy Badua. And the bad luck only intensifies when a magical amulet and the ghost of his great-great uncle plunge Freddie into a strange, often funny adventure.

Young readers should look for Mysterious Tea Set (ages six to 10), by Corey Ann Haydu, the fourth chapter book in the Hand-Me-Down Magic series. Alma and Del, who are best friends and cousins, find an old, perhaps magical, tea set in their abuela’s secondhand store. It seems to be connected to their family, but if so, why is it being sold? And why won’t their abuela answer their questions?