THE WASHINGTON POST – By eerie coincidence, I began reading William J Bernstein’s The Delusions of Crowds: Why People Go Mad in Groups in early January and was deep into it on January 6. I kept reading in the days that followed the unprecedented insurrection at the Capitol, putting the book aside occasionally to look at the scores of videos taken by participants before and during the rioting. ProPublica, the investigative news site, acquired more than 500 of these videos and assembled them into a compelling new kind
of documentary.

The people in these clips fit with what Bernstein describes as victims of delusions. In this instance they were victims of our deluder in chief, who concocted false tales of election fraud that he repeated again and again to convince his followers that Joe Biden had stolen the 2020 election. At a rally on January 6, President Donald Trump urged the crowd to march on the Capitol, “show strength” and “stop the steal”. At his bidding, the believers set off for the Capitol. The rioters’ explanations of their actions in the ProPublica videos put on full display Bernstein’s conclusions about the delusions of crowds. Bernstein wants us to understand that human beings are not remotely as smart or as rational as we would like them to be. Only rarely are people truly analytical about anything. We make things up constantly, then claim that our inventions are true.

“Novelists and historians have known for centuries that people do not deploy the powerful human intellect to dispassionately analyse the world, but rather to rationalise how the facts conform to their emotionally derived preconceptions,” Bernstein wrote. “Over the past several decades, psychologists have accumulated experimental data that dissect the human preference of rationalisation over rationality. When presented with facts and data that contradict our deeply held beliefs, we generally do not reconsider and alter those beliefs appropriately. (Instead) … we avoid contrary facts and data, and when we cannot avoid them, our erroneous assessments will occasionally even harden and, yet more amazingly, make us more likely to proselytise them. In short, human ‘rationality’ constitutes a fragile lid perilously balanced on the bubbling cauldron of artifice and self-delusion.”

Storytelling trumps analysing nearly always, Bernstein wrote. Narratives, not analytical constructs or algebraic solutions, are what engage the human mind. But “the more we depend on narratives, and the less on hard data, the more we are distracted away from the real world”, he added. This is how demagogic politicians and charismatic preachers can win us over, often despite their reliance on implausible narratives that beguile us. Reading Bernstein, I thought of Trump’s tales of Mexican rapists sneaking across our southern border, and Ronald Reagan’s “welfare queen”.

Bernstein is a neurologist with an MD and a PhD in chemistry who became an investment advisor and author. At the beginning of this, his eighth book, he warned that he won’t be writing about political delusions, but he added coyly that “the reader will, however, encounter no great difficulty connecting the episodes described in the coming pages, as well as their underlying psychology, to manias of all types, particularly to the totalitarianism of the last century and the viral conspiracy theories of this one”. He is right about that. 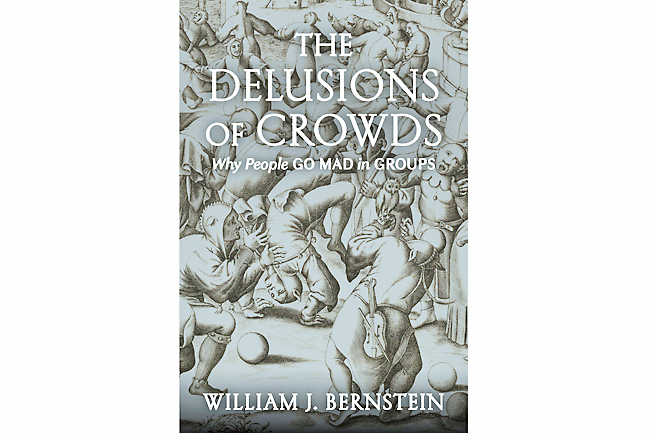 His subjects are financial manias. He succumbs to his own argument that narratives are more persuasive than analyses or calculations, and he loves telling stories, which he does well. That makes this a fun book to read, though a windy one, as the long quotation in the previous paragraph suggests. Bernstein is a good writer, but his internal editor
occasionally takes an unearned vacation.

His inspiration and guide for this book was a 19th-Century bestseller Extraordinary Popular Delusions and the Madness of Crowds by a Scottish writer named Charles Mackay, who was just 27 when he wrote it. Mackay’s book is still in print 180 years later and still popular among students of stock market behaviour. Bernstein’s version unabashedly echoes Mackay’s, enriching its analysis with the findings of modern social scientists who study the irrational human behaviour that intrigues both authors.

Both Bernstein and Mackay put religious manias and economic bubbles in the same category of mass delusions. The most powerful narratives, Bernstein argued, involve “end-times” stories. “The most prominent, and dangerous, mass delusion running like a red thread through human history, (is) the end-times narrative,” he wrote. He devotes a large portion of his book to examples of delusional crowds embracing end-times stories, from the Middle Ages to our day.

But we don’t need a poll to confirm Mackay’s and Bernstein’s conclusion that people tend to believe what they want to believe, whether or not hard facts and cold reason support their views. We know, for example, that on November over 74 million Americans voted to re-elect a man whom a slew of serious historians have already identified as the worst president in American history, a man whose personal behaviour was never remotely dignified, who often behaved like a compulsive liar with an uncontrollable need for approval and applause. His indifference to Americans who did not share his own attributes – European ancestry, white skin, economic comfort – was obvious. That indifference often became outright hostility that reeked of ethnic prejudice. He faced one huge crisis as president and utterly botched it. And yet, those 74 million-plus citizens evidently wanted four more years of making America great again. How could that happen?

From light romance to time travel