MONTGOMERY (AP) — The statues of chained men, women and children stick hauntingly out of sand as simulated waves crash overhead, a symbol to the estimated two million people for whom the slave trade ended in a watery grave in the Atlantic Ocean.

The exhibit is part on an expanded museum created by the Equal Justice Initiative that focusses on the legacy of slavery in America. The expanded Legacy Museum — a companion to the group’s well-known memorial to lynching victims — opens tomorrow and takes visitors on a journey through the origins of the slave trade through the civil rights era to modern criminal justice issues.

Equal Justice Initiative Executive Director Bryan Stevenson said the goal of the museum is to teach and confront “parts of American history that are not frequently taught,” an understanding that he said is a requisite for the country to move forward and heal.

“I believe that there’s something better waiting for us in America. I think that there is something that feels more like equality, more like freedom, more like justice than we have yet experienced. But to achieve that, we’re going to have to confront the damage, the problem, the lingering challenges that have been created by this long history of racial inequality,” Stevenson said in a telephone interview.

The museum ranges from the eras of enslavement, lynching, and Jim Crow laws to mass incarceration and modern criminal justice issues that are the focus of the Equal Justice Initiative’s legal work.

The 3,700-square metre Legacy Museum in downtown Montgomery, Alabama sits on the site of a former cotton warehouse. “You are standing on the site where enslaved Black people were forced to labour in bondage,” reads Stevenson. 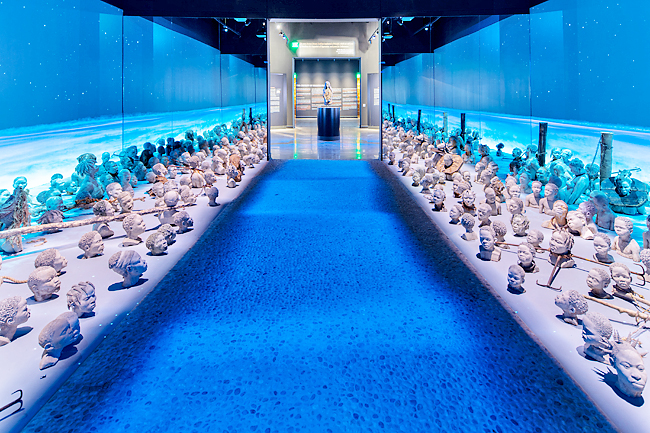 Down a dark hallway, images of slaves talking are projected on walls behind cell bars, and they address the visitors standing before them. The first is of a woman pleading for the children who were taken away from her. In another, two children huddle against each other.

“Momma, momma… Have you seen our mother?” they call out.

A wall is lined with jars of dirt taken from the sites where lynching victims were murdered. In another exhibit, visitors are invited to take a Jim Crow-era literacy test to register the vote.

“How many jelly beans are in the jar in front of you? How many seeds are in a watermelon?”

Stevenson’s early legal work focussed on representing death row inmates, winning exonerations for people wrongfully convicted, and he has described how some judges presumed he was the defendant because of the colour of his skin. His memoir Just Mercy became a movie by the same name.

Stevenson said he came to believe that slavery didn’t disappear but evolved, meaning that the elaborate myth of the inferiority of Black people used to justify slavery centuries ago didn’t just vanish in 1865.

“And even with the passage of the civil rights laws, we still presume things about Black people, when we see them, and that’s part of the reason why there’s so much frustration around: Black people being arrested for sitting in a Starbucks or being in a library or, you know, walking down the sidewalk,” Stevenson said.

The Equal Justice Initiative opened the Legacy Museum and The National Memorial for Peace and Justice in 2018. The memorial commemorates 4,400 black people who were slain in lynchings and other racial killings between 1877 and 1950. Their names, where known, are engraved on 800 coffin-shaped columns.

The organisation is aiming to create a space for people to confront and “deal honestly with this history,” just as South Africa has sites about apartheid and Germany memorialises victims of the Holocaust.

“One of the things we say is that the purpose of the museum is to create a society where the children of our children are not burdened by this history of racial inequality, are free to move throughout their lives without any presumptions being made, based on their colour,” Stevenson said. “But to get there, we’ve got some work to do and I hope this inspires people to do that work.”