THE WASHINGTON POST – Facebook CEO Mark Zuckerberg’s first-ever testimony before Congress in 2018 came in a highly charged atmosphere that set up his appearance as a pivotal moment for the company and a critical test for the young chief executive. Just weeks earlier, it was revealed that Cambridge Analytica, which worked with the Trump campaign, obtained Facebook profile data on millions of users to target voters, and Zuckerberg was under enormous pressure from politicians and the public to provide answers.

In the end, Zuckerberg passed the test easily. He often had answers at the ready, and when he didn’t, he respectfully pledged to get back to the committee. His performance stood out in comparison with that of lawmakers, who seemed naive about how the company worked. One senator even asked how Facebook made money if users didn’t pay for the service. In a now frequently memed response, Zuckerberg said, “Senator, we run ads,” his tone a mix of deference and incredulity.

Investors responded favourably to the performance, and after the two days of hearings were over, Facebook shares were up 4.5 per cent and Zuckerberg became USD3 billion richer as a result, Sheera Frenkel and Cecilia Kang report in their new book on the company, An Ugly Truth.

Somehow, Facebook even seems to make money off near-disasters. But that’s no accident, Frenkel and Kang wrote. The company has put growth and profits above all else, even when it was clear that misinformation and hate speech were circulating across the platform and that the company was violating the privacy of its users. The book is not the first to tackle these issues, but it adds a trove of rich detail that will be important in the ongoing assessment of social media’s impact on society and democracy. The authors, both tech reporters for the New York Times, zeroed in on what was arguably the most tumultuous period for the company since Zuckerberg founded it 17 years ago: the five years stretching from the run-up to the 2016 election through 2020. 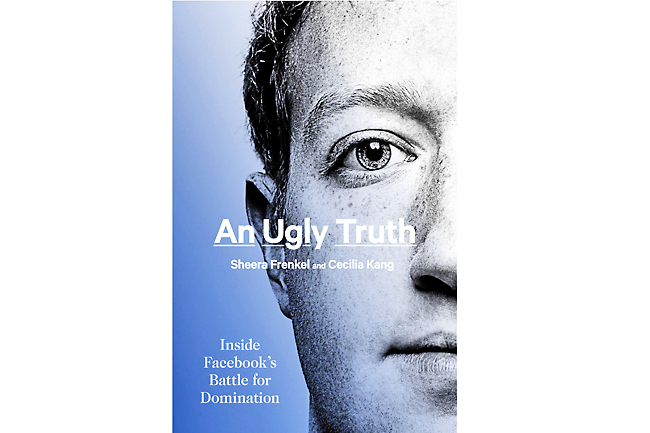 The Trump era roiled the social media platform as never before, starting with Russia’s disinformation campaign in 2016. Like other tech companies, Facebook wrestled with how to handle President Donald Trump’s falsehoods and divisive rhetoric, what to do about posts promoting the extremist ideology QAnon, and where to draw the line on “junk” news sites that played on emotion for clicks. It stumbled through the decision about how to handle a manipulated video of House Speaker Nancy Pelosi. In 2020, the coronavirus pandemic brought a new wave of misinformation, with anti-vaxxers at its crest. At the close of the Trump era, Facebook was found to be one of the platforms that rioters used to organise their January 6 insurrection at the Capitol.

Despite this, nearly three billion of us visit the site regularly, without giving much thought to what’s happening behind the scenes. We might know about Facebook’s problems in the abstract, but then curiosity intervenes; we want to see new pictures or life updates from our friends. So we log back in. Life goes on. Facebook makes more money.

Therein lies what the authors say is Facebook’s ugly truth, its “possibly irreconcilable” dual goals of advancing society by connecting the world while also profiting off the people it is connecting. To tell the story, Frenkel and Kang draw from their years of reporting on the company and from hundreds of interviews and documents to take readers, as the subtitle says, “inside Facebook’s battle for domination”.

That battle was often fought on defence and through improvisation, as the company veered from one crisis to another, swatting problems down as they arose and then apologising for whatever harm they caused. (The back cover of the book shows a string of apologies Zuckerberg and Chief Operating Officer Sheryl Sandberg issued over the course of Facebook’s life.)

The heart of the book, and its most compelling parts, involve the company’s discovery of Russian-generated disinformation on the platform during the 2016 election and the security team’s frustrated efforts to get their findings in front of Zuckerberg and Sandberg. When the leaders finally learn of the extent of the campaigns, recriminations and finger-pointing come out in tense why-didn’t-we-know-this? exchanges. And why, indeed, didn’t they? The answer, the authors wrote, is that the two were focussed on growth and didn’t take much interest in the security team’s work. One executive even suggested that Zuckerberg and Sandberg were being protected from knowing because “you can’t disclose what you don’t know”.

In any case, the apologise-later strategy worked on a financial level. Even a USD5 billion fine imposed by the Federal Trade Commission (FTC) after the Cambridge Analytica scandal didn’t really faze the company. Investors were pleased to have the case resolved, and the company’s stock rose once again. As Chris Hughes, the Facebook co-founder turned critic, told the authors, “Privacy violations were just the cost of doing business”.

The drama between Facebook’s Menlo Park, California, headquarters and its Washington office will make the book fascinating for followers of tech policy. Students of corporate leadership will long examine the Zuckerberg-Sandberg relationship and how he relied on her business savvy but later crowded her out of key areas.

Users of Facebook will better understand how they’re being manipulated – maybe they should be called “usees” – and the extent to which anyone is looking out for their interests. The authors walk through Sandberg’s model of behavioural advertising, saying it “treated human data as financial instruments bartered in markets like corn futures”.

Given the scope of Facebook’s problems, it’s easy to wonder whether anyone, or any agency, will be able to contain the company. The authors open their book with the antitrust lawsuits brought by the FTC and 48 state attorneys general alleging that Facebook was a powerful monopoly that violated the privacy of users, stifled innovation and killed competition. The lawsuits represented an imminent threat, the authors write, the “strongest government offensive against a company since the breakup of AT&T in 1984”.

Even that threat, though, has now been neutralised, at least temporarily. Since the authors’ prologue was written, a federal judge has dismissed the suits. That’s not to say Facebook’s adversaries won’t find another way to challenge the company on antitrust grounds. A new filing – and new laws – are still possible.

But once again, the pattern repeated itself. Facebook averted disaster, investors responded favourably, and the company experienced another growth spurt. On the day of the judge’s dismissal, Facebook’s stock rose four per cent, pushing its market capitalisation above USD1 trillion for the first time.