SANDAF, SYRIA (AFP) – Syria’s grinding conflict has already uprooted Ahmed Yassin and his family several times, but now they fear a threatened Turkish offensive will force them to flee the muddy camp they call home.

The 34-year-old, his wife and two children live in Sandaf in Syria’s Aleppo province -just south of the border with Turkiye, and under the control of Turkish-backed rebels.

“Making a living is hard,” the labourer told AFP in the impoverished camp, as sheep grazed on the roadside nearby.

“On top of everything we’ve gone through – the misery, the lack of job opportunities and poverty… we are now threatened with displacement yet again.”

On November 20, Turkiye began air strikes on Kurdish-held areas of Syria and Iraq in response to a deadly bombing in Istanbul the previous week. 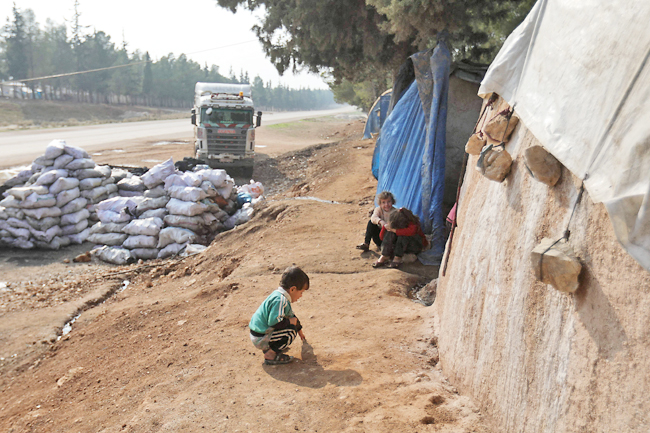 One of them, Tal Rifaat, is less than 10 kilometres from Sandaf.

Yassin recalled fleeing his hometown in neighbouring Idlib province after fighting flared there earlier in the civil war.

“We pray for God’s help, and for us to return to our towns, our lands, our homes,” he said.

Since 2016, Turkiye has carried out successive ground operations to expel Kurdish forces from border areas of northern Syria.

Its troops and their Syrian proxies hold swathes of the border, and Erdogan has long sought to establish a “safe zone” 30 kilometres deep the whole length of the frontier.

Turkiye said the groups were behind the Istanbul bombing,an accusation both organisations have denied.

At the Sandaf camp, children, some barefoot, played on the ground between tents. Camp resident Mohammed Abu Ali said there was sporadic shelling between the opposing sides even before Turkiye launched its air assault last month.

The 45-year-old, who lives with his five children, one of whom uses a wheelchair, he said the fighting left camp residents in “a state of panic and fear”. “We hope that either a military operation will allow us to return home, or that they will reach an agreement so we can stay in the camp,” said Abu Ali, also originally from Idlib.

“All we want is… to live the remaining days of our lives in our homes,” he said, standing by a washing line strung from his tent.

Human rights groups have warned that civilians on both sides of the front line will bear the brunt of any new flareup.

Renewed conflict in northern Syria would be “the last straw for millions of people grappling with the dire humanitarian conditions”, Save the Children and other groups warned this week.

Another surge in hostilities will potentially result “in a new wave of displacement”, they said, urging all parties to protect civilians.

Any advance by Turkish-backed forces is likely to spark a mass exodus of Kurdish civilians on the other side of the front line, but any new flareup holds fears for civilians in Turkish-held areas too, with heavy exchanges likely across the front line.

On the front line in Tal Rifaat, Turkish-backed Syrian fighters peered out from behind sandbags as a thick fog enveloped the area.

At positions further east near Manbij – another target of the threatened Turkish ground offensive – a fighter sat by the roadside as others made tea inside a cramped breeze-block bunker.

Turkish-backed fighters were scattered along the front line without any heavy equipment, an AFP correspondent reported.

In some areas, there were no fighters at all, while in others, a few rested inside their bases, some scrolling through their phones.

Government ally Russia deployed troop reinforcements to the Kurdish-held Tal Rifaat area this week,while the United States warned Turkiye not to disrupt operations against the Islamic State group in Syria in which Kurdish fighters of the YPG have played a central role.

A Turkish-backed fighter near Tal Rifaat, who identified himself as Yussef Abu al-Majed, said he was eager for battle but had received no orders to attack.

If Turkish-backed forces “don’t have the green light from Turkiye, they cannot act on their own”, he said.

“And if Turkiye does not have the American, Russian and Iranian greenlight, it cannot engage in military action” in northern Syria.

Iran is the Syrian government’s other main foreign ally.