THE WASHINGTON POST – A great travel read is an ideal companion for warm-weather vacation time, whether you’re beach-bound or staying home. After all, books are fellow travellers on demand: In their company, you can catch vicarious thrills without budging from your preferred mix of sun and shade. And this year has brought a fresh crop of travel writing worth exploring, tales that include illustrated Siberian journeys, brooding mysteries and a continent-hopping memoirs.

Craving distant horizons? Scratch the itch with some of the best travel books of 2022 – so far.

THE SLOW ROAD TO TEHRAN: A REVELATORY BIKE RIDE THROUGH EUROPE AND THE MIDDLE EAST BY REBECCA LOWE
When reporting on Lebanon’s 2014 simmering refugee crisis – a trip that included a bicycle journey against all recommendations – London-based writer Rebecca Lowe drew one important conclusion: “Never trust people who say things can’t be done.” Such can-do spirit suffuses her new book about a 2015 solo cycling journey from London to Tehran, which unfolds across 20 countries and nearly 7,000 miles.

“We think you’ll probably die,” one friend told Lowe on the eve of her departure. She didn’t, and Lowe, whose winningly self-depreciating tone persists through adventures and misadventures alike, is no naif. A veteran journalist with a focus on human rights, Lowe is clear-eyed about the fraught history of Western adventurers in the Middle East, with a reporter’s knack for depicting the vivid characters she encounters. Available in travel-friendly e-book format, the book’s hardback edition will be released September 6. 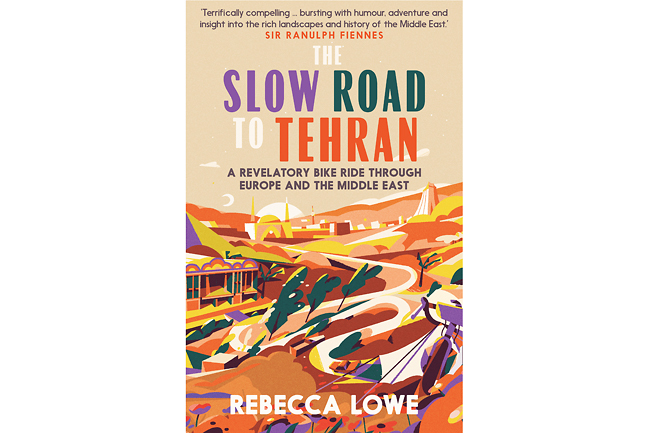 Handwritten notes accompany the images, which are sometimes framed with a traveller’s-eye view of train windows and passenger compartments. Others serve as whimsical compendiums: Fick lists Mongolia’s five domesticated animals; documents fellow passengers’ fuzzy-slippered train wear; and ranks the quality of second-class dining cars by country. The effect is charming, yes, but it also invigorates.

CROSSED OFF THE MAP: TRAVELS IN BOLIVIA BY SHAFIK MEGHJI
As prologue to this thoughtfully reported book, British travel writer Shafik Meghji recounts a telling bit of apocrypha. Following a diplomatic kerfuffle, Queen Victoria is said to have taken a pen and crossed Bolivia off her map of South America, insisting the country could therefore not exist.

Despite a 21st Century increase in tourism, much of Bolivia remains largely unfamiliar to foreigners, says Meghji, who has written guidebooks for more than a decade. For a better acquaintance, this book is the next best thing to a slow journey through the country’s staggeringly varied topography. Readers can tag along with Meghji by Amazonian riverboat, follow in the footsteps of jungle Jesuits or go on foot into the high-altitude Potosí silver mines that enriched an empire.

RIVERMAN: AN AMERICAN ODYSSEY BY BEN MCGRATH
Americans have long loved tales of travelling folk heroes, such as Johnny Appleseed and Chris McCandless. When New Yorker writer Ben McGrath first encountered Dick Conant – a bearded, overall-clad wanderer then travelling by plastic canoe from New York to Florida – he seemed to have stumbled upon the real deal floating past the backyard of his Hudson
River home.

After Conant’s boat was found abandoned in North Carolina, McGrath set out on a quest to learn about the life of a man he calls a “modern-day Huck Finn”. There’s plenty of fodder for romance: Conant logged thousands of miles on American rivers, and many of the people he met along the way remember him, years later, with astonishing clarity. But darker sides of Conant’s life emerge in McGrath’s reporting, which illuminates but does not resolve the book’s central mystery.

A HARD PLACE TO LEAVE: STORIES FROM A RESTLESS LIFE BY MARCIA DESANCTIS
In writing that spans continents and nearly four decades, Marcia DeSanctis mines a lifetime of travel for this new collection of essays. That time lends depth that first impressions cannot touch. She retraces portions of journeys through the Soviet Union and Russia, layering memory upon place to rich effect.

Some pieces originally appeared as stand-alone stories in publications such as the New York Times Magazine and Vogue, but together they take on a journey’s momentum. Along the way, DeSanctis encounters spies and love interests, but it’s her lushly polished writing that makes this book a joy to read.