Expats, residents mourn the loss of a revered Queen

Queen Elizabeth II, Britain’s longest-reigning monarch passed on September 8 after 70 years on the throne. The sudden death of the 96-year-old monarch shocked the world.

British High Commissioner to Brunei Darussalam John Virgoe in a statement yesterday expressed his grief on the passing of Queen Elizabeth II.

“Her Majesty Queen Elizabeth II’s passing is a moment of profound grief and loss. Her Majesty was a constant and steady presence for over seven decades. Known for her sense of duty and her devotion to a life of service, she was an important figurehead for the United Kingdom (UK), the Realms and the Commonwealth during times of enormous social change,” he said.

“No one has done more to strengthen the bonds of friendship, understanding and respect between the UK and the rest of the world, including Brunei. I know she was held in high regard in the Sultanate and that her loss will be mourned by many. The loss will be felt particularly deeply by the British community. For most of us, including me, she is the only Head of State we have ever known. Though far from home, we will be joining with the rest of the nation in mourning her loss,” he added.

Similarly, Hayley Hammond, a British citizen based in Brunei, shared, “While always inevitable, it still comes as an absolute shock to lose such an admirable lady. 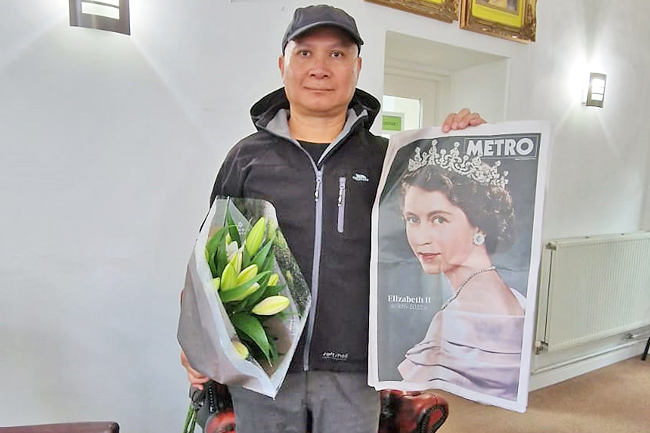 “The Queen was and forever will be, the epitome of a noble monarch forever in our hearts and minds. Our deepest condolences to her immediate and extended family. Your Majesty, your duty is now done, may you rest in peace.”

Chloe Gorvett shared that Queen Elizabeth II was a much loved Queen, who selflessly dedicated her lifetime to serve her country. “She is a mother, grandmother and great grandmother who will be missed.”

A member of the Brunei Brits Community, Chris White commented that in an increasingly self-serving and self-obsessed world, the Queen has been a beacon of public duty for 70 years and more.

“Our Queen has always served us with grace and dignity.

“As a person of faith, I was most impressed by her and by the way she led Britain to be a more inclusive nation and one which respected and gave freedom to all faiths. I am grateful for her service.

The Tonge family offered their condolences to the royal family on the passing away of a mother, grandmother and great grandmother of a family, a nation and Commonwealth.

“We hope the nation of Brunei will join us in condolences for the loss of the head of Commonwealth and celebrate an amazing life well-lived.”

Meanwhile Bruneian Muzaffar Shah Abdullah who has been working in the UK since 2009 shared that London is mourning and he can feel the sombre atmosphere in the city as how he himself feels too.

“Just like how much we love our Sultan, it is the same with the people here who most are still taken aback with the sudden news and some of my local friends went speechless because they were just feeling too sad to hang out or talk.”

Mus, the head chef at the Brunei Hall, said even riding on the bus on his way to work was unusually quiet as everyone was attached to their phone reading the news and some were sitting quietly looking out of the window saddened by the news.

Khaz, another Bruneian who is currently working in London shared, “I personally felt deeply saddened on the passing of the Queen.

“It felt like only yesterday we witnessed the Queen’s Platinum Jubilee and everyone was really happy and enjoyed the historical moment.”

Former resident from Windsor, Berkshire, who is now residing in Brunei, Danniele Cairns also shared her grief over the passing of Queen Elizabeth II.

“Today is a very sad day for many. The influence of Queen Elizabeth ll and her stoic approach to her position has guided the people of Great Britain for most of, if not all of, their lives,” she said.

Irene Shahri shared that her two favourite quotes from the Queen are “Grief is the price we pay for love” and “It has always been easy to hate and destroy. To build and to cherish is much more difficult” as they are words that hit close to home for her.

“Grief for me only happens to us when we lose someone very dear or someone we love and these quotes do reflect my feelings,” said Irene.

Meanwhile, Siti said that Queen Elizabeth II has always been a source of inspiration, adding that despite being perhaps the most recognised leader in the world, she carried herself with a sense of humbleness and sincerity. “True to her word, she continued to serve her people until her final days since she took the throne at the age of 21. As a Bruneian with the awareness that we were once a British colony, I believe that the progress we have achieved since our independence from the British in 1984 is influenced by the late Queen’s leadership,” she said.

A representative from the Brunei Southampton Society said, “Our community is saddened to hear about the death of Queen Elizabeth II. Our thoughts go out to not only the royal family, but also the whole nation.”

“May her soul rest in peace. My heart goes out to everyone during these times. This is a shock. I can’t imagine how everyone must be feeling,” said Arif Shahrin at University of Edinburgh.

Members of the public can pen their personal messages of condolence on the passing of Queen Elizabeth II at the Condolence book signing to take place at British High Commission office, Second Floor, Yayasan Sultan Haji Hassanal Bolkiah Complex from September 12-17 from 10am to noon. They can also pay their respects using the online condolence facility at www.royal.uk.