DAHARKI, PAKISTAN (AFP) – Norman Riaz was lying on his bunk bed aboard the Millat Express and playing with his mobile phone as it sped through the Pakistan countryside just before the deadly catastrophe early Monday.

The train was heading north from Karachi to Lala Musa with around 600 passengers aboard when it derailed at 3.30am in the first part of a 25-hour, 1,300-kilometre journey.

It’s not known what caused the train to jump its tracks, but Interior Minister Sheikh Rashid – a former railways minister – described that section of the line as “a shambles”, while current Minister Azam Swati called it “really dangerous”.

Business-class passengers were stretched out on their bunks in their exclusive cabins, while those in economy were sitting shoulder-to-shoulder on padded bench seats.

Those in his cabin survived the derailment relatively unscathed, but just minutes later his world was turned upside down. 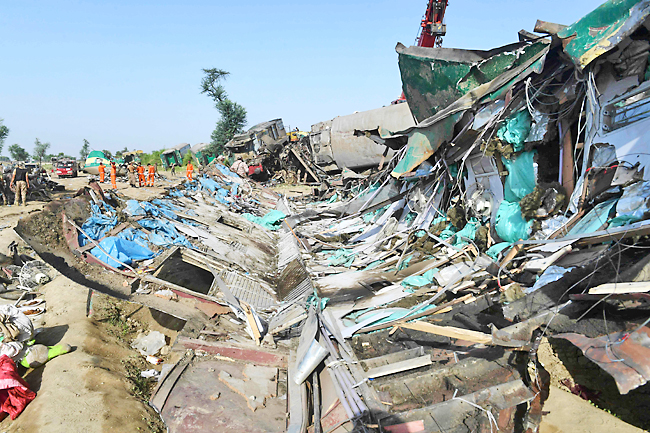 “We fell down but there were no injuries as such,” he said.

“But when the train hit us, everything turned topsy-turvy. My mother died in front of my eyes, everybody died.”

The Sir Syed Express, in the last hours of a similar- length journey in the opposite direction from Rawalpindi, ploughed into the derailed train at speed, slicing through metal carriages like a tin opener.

At least 40 people were killed and over 100 injured – most of them from the Millat.

“We tumbled upon each other, but that was not so fatal,” Millat passenger Akhtar Rajput
told AFP.

“Then another train hit us from nowhere, and that hit us harder. When I regained my senses, I saw passengers lying around me, some were trying to get out of the coach.”

“I was disoriented and trying to figure out what happened to us when the other train hit,” Shahid, another passenger, told AFP.

The locomotive driver of the Sir Sayed Express said he had seen only green lights as he trundled along the track.

“But when I crossed the signal and sped up then I saw few people signalling me (to stop),” Iftikhar Thaheem told local media.

“I pulled the emergency brake, but it was too late,” he said, his head swathed in bandages and uniform covered in blood.

Local farmers and villagers were quick to the scene and by late Monday were still helping move wreckage, as army and civil engineers led a mass effort to clear and repair the tracks.

Railway officer Tariq Latif told AFP that they hoped to have one line open by midnight.

The railway first came through the cotton- and wheat-growing district in the 1880s, and little has changed in the 140 years since.

The accident happened on a section of track raised above fertile land that stretches to the horizon, with homes and small settlements dotted about.

As news spread, locals arrived on foot, bicycle and tractor to offer help, toiling under a blazing sun that pushed outdoor temperatures past 45 degrees Celsius.

A soldier stood on an overturned carriage, shouting instructions through a megaphone.

Throughout the day the injured had been ferried by ambulances and private vehicles to nearby clinics and hospitals.

The dead were lined up next to the tracks, covered in sheets and blankets.