THE WASHINGTON POST – When wild elephant females reunite after a separation, they greet each other with great ceremony. The elephants flap their ears, bellow and place their trunks in each other’s mouths. The temporal glands next to their eyes may stream liquid, a sign of high arousal. And in “the ultimate expression of sheer, elephantine joy”, the animals then let loose with bladder and bowels.

With this description in Wild Rituals: 10 Lessons Animals Can Teach Us About Connection, Community, and Ourselves, elephant scientist Caitlin O’Connell kicks off an engaging tour of rituals in the animal kingdom. O’Connell defines a ritual as “a specific act or series of acts that are performed in a precise manner and repeated often”, often requiring intense concentration.

This definition encompasses not only learned behaviours but also biological events, such as monarch caterpillars undergoing metamorphosis to become butterflies that migrate to avoid cold, and bears that stuff themselves with food to survive a hibernation-like state in winter. Rituals occur in 10 contexts: greeting, group rituals, courtship, gifting, spoken rituals, unspoken rituals, play, grieving and healing, renewal, and travel or migration.

O’Connell’s studies of the elephants at Etosha National Park in Namibia have spanned 30 years and make for delightful pachyderm stories, while at the same time a strength of the book is the variety of animals she includes. Wild zebra stallions head up harems of females. When the males meet one another, they let out high-pitched vocalisations, nuzzle and wrap necks with each other, and assume a facial expression with teeth bared and lips drawn up so that “it really looks like they are enjoying a hilarious joke together”. The point is for the males to build trust and tamp down tension. Closer to home, our dog companions are famous for their exuberant, full-body greetings when we return home from an outing or the office. 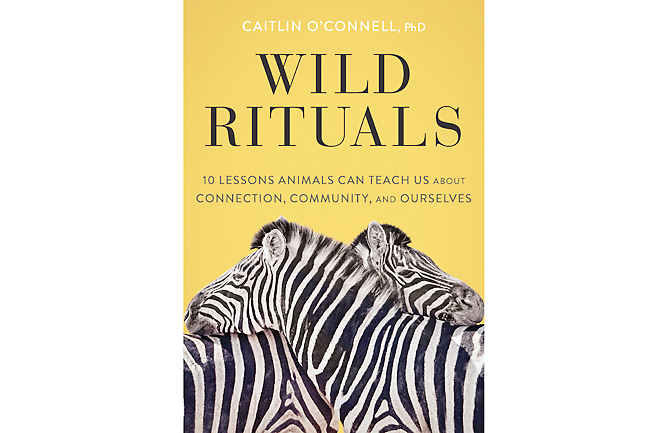 Animals enact complex sequences of steps to attract mates. Caribbean flamingoes begin the mating season by marching as a group with closely synchronised movements. In the British Virgin Islands, O’Connell watched as 60 flamingoes held their necks erect and beaks high, moving their heads in a back-and-forth pattern called head-flagging. What a fabulous sight that must have been! This set of behaviours triggers a month of courtship for the birds, marked also by precise sequences first by males then females, after which breeding pairs form. “For many species, courtship rituals are encoded in their genes,” she concluded.

O’Connell suggests that flamingo courtship is “most similar to square dancing” in humans because “individuals participating in the dance engage in a series of organised and synchronised actions that result in a pairing off of couples”. Grieving in animals is a rich suite of behaviours, though, expressed differently by different individuals depending on their personalities and on their relationships with the deceased. Reducing it to an instinct seems too simplistic, as does saying things like “the travel bug is encoded in our genes” – as if all of us feel identical urges to be on the move because many animals migrate, as did our human ancestors. O’Connell even suggests that “helping in humans is instinctual” because children show evidence of it by age one. Anthropologists look at this differently, pointing out that an enormous amount of learning and cultural shaping happens in a baby’s first year of life.

In a welcome way, O’Connell rejects any tendency toward human exceptionalism, a stance rooted in the belief that humans are inevitably exceptional in our intelligence and emotional expression. Yet I wonder if at times she takes this perspective a step too far. She describes food-sharing patterns in hunter-gatherer societies, for instance, then in the same paragraph said that “this same dynamic exists among vampire bats”. She means that vampire bats also reduce food insecurity through social sharing of food resources. But can the “same dynamic” really exist in a bat society as in a human society steeped in linguistic and cultural traditions?

How we – animals ourselves – may benefit by paying mindful attention to rituals in our own lives is a vital message of the book. O’Connell cites evidence showing a decline in rituals that bring person-to-person instead of screen-to-screen connection (even before the pandemic) and urges us to resist that trend. To that end she recounts personal and often moving stories from her life, beyond the practice of elephant science. When her brother was dying, she flew home to say goodbye, but owing to travel delays, she arrived too late. Being able to view an open casket and being present at the burial site with loved ones helped with closure, strengthening her appreciation of the comfort we may derive from mourning rituals.

O’Connell leaves the reader with this thought, “Our rituals help us to not lose sight of ourselves and our place in the natural world.” If achieved, that sense of connection with nature would bring benefits to all living species.