MAI AINI REFUGEE CAMP, ETHIOPIA (AFP) – They have survived gun battles, attempted abductions, attacks by angry militiamen and days-long treks to safety with nothing to eat but moringa leaves.

Yet Eritrean refugees in Ethiopia fear their suffering may not be over, as Prime Minister Abiy Ahmed strains to end a brutal conflict in the northern region of Tigray that has rendered them uniquely vulnerable.

Nearly 100,000 refugees from Eritrea, an oppressive, authoritarian nation bordering Ethiopia to the north, were registered in four camps in Tigray when fighting erupted last November between Abiy’s government and the regional ruling party, the Tigray People’s Liberation Front (TPLF).

Two of those camps, Hitsats and Shimelba, were caught up in hostilities and remain inaccessible to the United Nations (UN) refugee agency and its Ethiopian counterpart, the Agency for Refugee and Returnee Affairs (ARRA).

The information vacuum has spurred dire speculation over the refugees’ fate.

The UN has sounded the alarm over reported targetted killings and abductions by Eritrean soldiers, whose role in the conflict is widely documented but officially denied by Addis Ababa and Asmara. 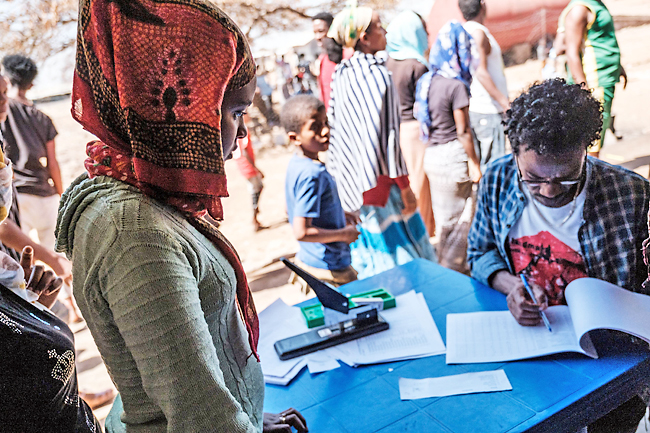 The United States (US) State Department last week cited “credible reports” of looting and violence in the camps.

On his first trip to Ethiopia since the conflict began, UN Refugees Chief Filippo Grandi over the weekend visited Mai Aini, one of two camps in southern Tigray where the UN has regained access.

The camp is now home to hundreds of refugees from Hitsats, some of whom told AFP of the horrors they left behind.

“Most of the people, if you search this camp, they’ll start crying when they talk about what happened,” said Girmay, who like other refugees insisted on using only one name, fearing reprisals.

“Our friends could be alive or dead. We don’t know.”

The TPLF dominated Ethiopian politics for almost three decades – it was in power when Ethiopia and Eritrea fought a border war that killed tens of thousands between 1998 and 2000 and led to a two-decade stalemate.

After taking office in 2018, Abiy initiated a surprise rapprochement with Eritrean President Isaias Afwerki, a move that won him the Nobel Peace Prize the following year.

Yet Isaias and the TPLF – whose region borders Eritrea – remain bitter enemies, heightening the risks for Eritrean refugees caught up in the conflict.

On one morning the militiamen shot dead nine young Eritrean men outside a church, they said.

Pro-TPLF forces based themselves out of Hitsats for weeks, forbidding hungry residents from going out in search of food and shooting dead several who tried anyway.

“At first we couldn’t believe it because they speak the same language as us,” Girmay said of the pro-TPLF forces.

“Before we are friends… Suddenly they came and killed.”

Eritrean soldiers also committed abuses, the refugees said, arresting dozens of people and whisking them to an unknown destination.

“The Eritrean soldiers caught some people and started asking them questions. I’ve counted 26 or 27,” one refugee said.

“The next day they took them somewhere else. We don’t know where they are.”

Many refugees fled Eritrea to avoid its notorious system of compulsory national service, which inspires descriptions of the nation as an “open-air prison”, and among their greatest fears is to be forced back.

Addressing reporters at the end of his visit on Monday night, the UN’s Grandi said he had come away with “a more complex sense” of who committed abuses.

Ethiopia’s government is investigating abuses and will try to account for all of Hitsats’ pre-conflict population, which it estimates at around 11,000, said ARRA’s Executive Director Tesfahun Gobezay.

“With regard to Eritrean soldiers taking Eritrean refugees, we don’t have any solid evidence yet,” Tesfahun told AFP.

Eritrean forces assumed control of Hitsats in early January and forced those remaining in the camp to evacuate, refugees said.

“They threatened to kill us and people were afraid,” said one refugee now in Addis Ababa, who asked that his name not be used.

Roughly 3,000 refugees from Hitsats and the other inaccessible northern camp, Shimelba, have since reached the two camps in southern Tigray, many travelling by foot with no water and only leaves for food.

In Mai Aini some new arrivals complained of poor access to clean water and of not having a place to sleep.

But their biggest concern, shared by some longtime residents, was for their security, with several worrying that pro-TPLF militias could attack the camp despite an extensive federal military presence nearby.

“How can I feel safe here?” said Natnael, who has lived in Mai Aini since he was a boy. “There are many militias around the camp.”

ARRA’s Tesfahun said the southern camps were safe and that progress had been made in re-establishing basic services.

Grandi, for his part, called for a more efficient system of distributing aid, saying the current situation in Tigray was “very grave” and that “without further action it will get worse.”

It remains to be seen what has become of the two camps in northern Tigray that are still out of contact.

“There are clear and consistent patterns across both camps over a two-month period demonstrating that these refugee camps were systematically targetted despite their protected humanitarian status,” it said in a statement.