GC Managing Director Richard Chuang invited them to take a closer look at the company’s operation.

After savouring seafood dishes featuring shrimps and fish sourced from GC, the guests watched a presentation before touring the facilities.

Chuang said the integrated seafood company was established with the support of the government of Brunei. 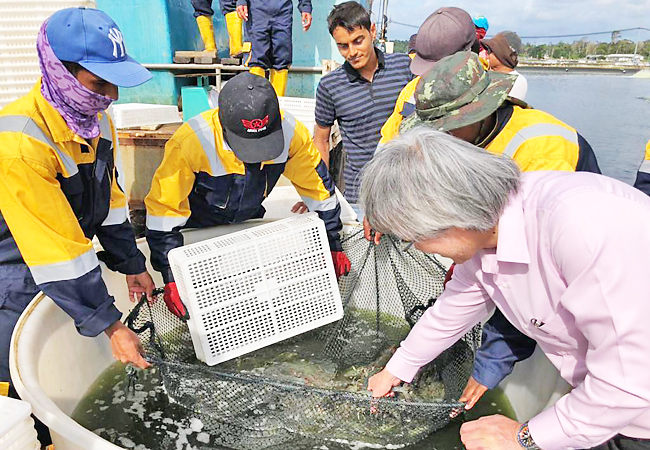 It is expected to reach more than 6,000 metric tonnes this year. The produce is sold locally and exported to Australia, Japan, Malaysia, Singapore and China.

Chuang briefed the guests during a tour of the factory and offices including highlighting the adaptability of the new production system and new feed and health products. The final leg of the tour was at the shrimp farm to see farm upkeep activities and shrimp collection using nets.

GC is a foreign direct investment (FDI) company established in 2002. The company started as a hatchery for shrimp and fish fry before expanding into shrimp farms, fishmeal and feed mill plants, and in 2012, set up the first integrated seafood processing plant in Brunei.

With over BND50 million invested to develop the seafood industry in Brunei, GC employs over 200 local employees manning three shrimp farms in the Tutong District as well as three processing plants in Tutong and Brunei-Muara districts.

GC also invested in fishing vessels capable of operating in Brunei’s deep marine zone to catch Yellow Fin Tuna, Skipjacks, and other marine fish that can be turned into value-added products such as surimi.