The movement restrictions due to the COVID-19 pandemic are not as much of an inconvenience. Many have chosen to take advantage of the increased free time to learn new skills.

In an interview with the Bulletin, Asyraf Aryan, 21, said thefree time has allowed him to dive into the world of baking. “Since the pandemic started, I’ve filled up my time with new hobbies such as baking. I learnt and experimented with cookie recipes, resulting in a lot of trials and errors.”

His new hobby has morphed into something more. “Eventually, combined with enthusiasm and support from my family and friends, Alhamdulillah, I gathered the courage to open a home-based cookie business.”

Asyraf highlighted that the most important lesson he’s learned from his baking journey is his ability to tackle his ambitions. “I figured that after much suffering, isn’t it finally time I gathered the courage to pursue things that I could only dream of? Because at the end of the day, I believe I deserve success. I wouldn’t have come to this revelation if it was not for the second wave of COVID-19.

“It’s a blessing in disguise.”

The main reason Asyraf wanted to open a cookie business, especially during these trying times, was because he wanted to inspire others. “Whatever disaster may come our way, such as COVID-19, we can always rise above it and thrive in the face of adversity.” 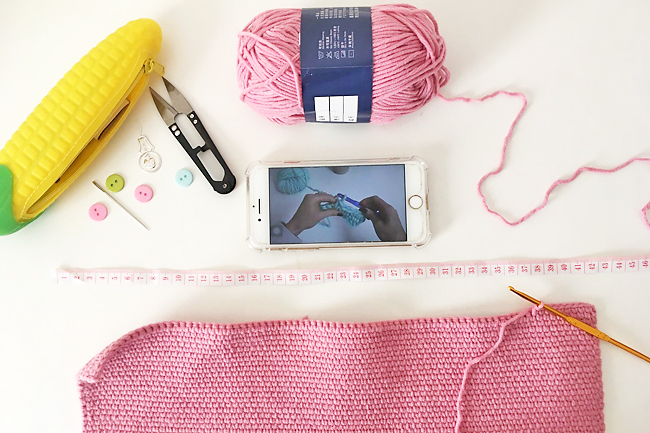 Asyraf advised anyone looking to start baking or learn a new skill is to simply start. “When it comes to change, there are often a lot of back and forth. The best way to silence negative thoughts is to simply start something that you’ve always wanted to try. You’ll be amazed at what you’re capable of.”

Meanwhile, Suhaila Nasuha, 20, embarked on a new journey with crochet. “I picked up crocheting because of the free time and wanting to learn something new.”

Suhaila said she was familiar with it as, “I joined a crochet club back in secondary school, but I did not learn much as I was not very active. That was the first time I heard about crochet.

“Then, at the start of the second wave, I watched a video of someone crocheting a pretty cardigan and it made me want to give it another go.

Suhaila’s interest in crochet led to a desire to start a business as she wants to find more ways to benefit from crocheting.

“I would love to run a business, but I think that will be in my future plans because I am still new to the hobby.”

Her tips for those who want to start crocheting is to be patient. “They should read instructions or watch videos carefully. It can make a difference to the end product.”

For Ahmad Mirza, 22, culinary was a skill of choice to pick up during the pandemic.

“The second wave made me develop an interest in cooking.”

Mirza said cooking is a necessary skill that every individual should have. “In my opinion, cooking is a must for everyone. That is why I decided to learn how to cook.”

Mirza said learning to cook will help him in the long run. “As I develop my culinary skills, I can cook delicious food and eventually, for my future family when I get married.

“I don’t just learn simple recipes; but challenging dishes, too. Most of the simple recipes I’ve learned are through Tiktok. If I’m looking for something more complex, I turn to YouTube.”

Meanwhile, Shuhairah Ahmad was affected differently as her job involves early child education. Her employers had to cut her pay to keep the business afloat.

“It was devastating at first. I started panicking and wondered how I could pull through. I only had enough to pay my loans and bills,” she said.

Due to her financial struggle, she started a home-based business.

“I was never confident in selling my baked goods. Since we couldn’t work like we used to, I spent most days scrolling through cooking and marketing videos. The more I watched, the more inspired I became. Then one day, I decided to go for it.”

She said it was not easy at first, stating that the hardest part was calculating costs and figuring out the right price point. “I did not want the goods to be too expensive, but I also wanted to make profits from the sales. After figuring out what my customers wanted and how much they were willing to pay, Alhamdulillah things have become smooth running,”
she said.

For some, however, the second wave of COVID-19 blurred the lines between personal and
professional life.

“Spending more time alone has taken a toll on me,” Farah Jehan, a 25-year-old clerk, said.

“The first few days, I started feeling anxious. As I worked on ad hoc tasks, even after the suggested working hours in the confines of my own home; I felt overwhelmed.”

Farah began readjusting and finding ways to cope with the new normal.

“I realised I had more time for myself. I began to self-reflect and asked myself why I was feeling a certain way… what did I miss the most, and am I a good person? I listed this down and had a better understanding of who I am.

“From there, I listed things I could improve on to be a better version of myself. It was therapeutic.

“I learnt not to feel guilty and took better care of myself, drawing a clear line between work and personal time, which wouldn’t have been possible before the pandemic,” she said.