CNA – A thumping strike from Harvey Elliott was enough to give FA Cup holders Liverpool a 1-0 win away to Wolverhampton Wanderers in a third-round replay yesterday.

Teenage midfielder Elliott (AP, pic below) burst forward with plenty of space to run into and unleashed a fizzing strike which flew past Wolves’ flummoxed goalkeeper Jose Sa in the 13th minute.

Wolves were passive for much of the first half before growing into the match after the interval but Liverpool’s defence kept them at bay to earn a first win in four matches in all competitions.

The result set up a fourth-round tie away to Brighton & Hove Albion, where Jurgen Klopp’s side were thrashed 3-0 in the Premier League on Saturday.

West Bromwich Albion joined Liverpool in the fourth round by routing Chesterfield 4-0 at home, Birmingham City came from behind to beat Forest Green Rovers 2-1 and Luton Town won 2-1 at Wigan Athletic. Bristol City knocked out Swansea City, prevailing 2-1 away from home after extra time. 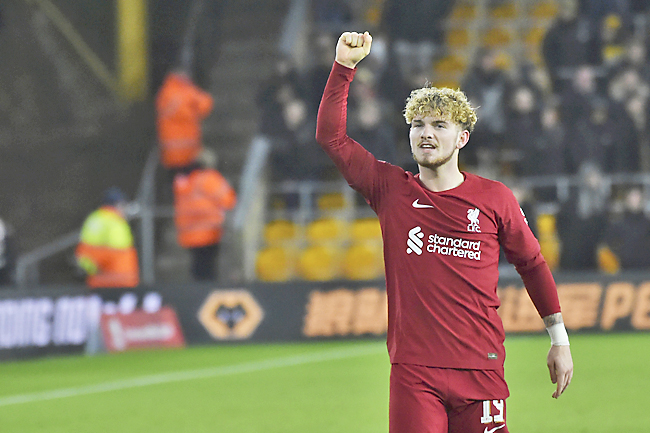 Match-winner Elliott said he had been encouraged to let fly from long range by team mate James Milner.

“Milly (Milner) was screaming ‘shoot’ as well so I had to go for it. Maybe he can encourage me a bit more to shoot because it definitely worked,” he told BBC Sport. “I have been judged a bit on assists and goals and it is something I have been working on and it came off today.”

The match lacked the entertainment and drama of the last meeting between the two sides at Anfield, which ended 2-2 and left Wolves furious after they had a late goal ruled out for offside.

Wolves coach Julen Lopetegui hauled on his attacking artillery in the second half in search of an equaliser and Brazilian forward Matheus Cunha had their best opportunity when he won a free header in the area but could not get enough power on it to trouble Liverpool goalkeeper Caoimhin Kelleher.

Liverpool coach Klopp made eight changes to the side that were outplayed by Brighton in what the German coach described as the worst match he could remember in his eight years in charge of the Merseyside club.

They did not exactly produce an emphatic response but controlled the game and earned their first victory of 2023 while recording a first clean sheet in eight matches.

“It feels like ages ago we had a feeling of winning and playing well. “We had to fight hard at the end which we controlled for long periods. It is great and the reaction we wanted to see,” said Klopp.