ANN/KOREA HERALD – BTS’ Busan concert on Saturday was not just a live music show, but a promise with the fans of the future it has ahead and a declaration to the world that its best is still yet to come.

“Whatever happens, if the seven of us hope for the same and if you guys trust us, we will overcome everything and continue to be happy and hold concerts,” the band leader RM said to the crowd during the concert.

BTS’ concert ‘Yet To Come’ took place at the Busan Asiad Stadium on Saturday evening. It was the first concert in South Korea from the band in seven months since the act’s Seoul arm of “Permission to Dance On Stage” held in March.

It was the first time that BTS’ concert had turned into a nationwide festival, instead of a gathering for the band and its fans. The tickets for the 50,000 in-person attendance and the 10,000 remote real-time view had been allotted for free, with a set amount provided to paid-membership fans first and the rest given out to the general public through lottery system. The event was also live-streamed through various online and broadcast channels around the globe.

Signalling the start of the night was massive explosions of fireworks that soared into the open sky above the outdoor stadium. BTS brought the awestruck audience’s eyes back onto the ground with the first song of the night MIC Drop.

MIC Drop was powerful enough to electrify the 50,000 audience, but up next was Run BTS, the new song from the act’s latest album Proof that was being unveiled live for the first time that night. 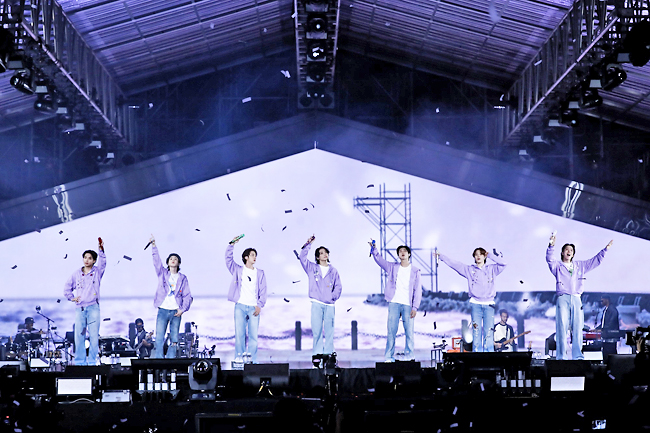 The band continued to up the energy with another of its pulsating hip-hop banger Run before addressing the crowd for the first time.

“We’re holding a concert in Busan in three years since 2019. We’re honoured to be back such a long time to hold a concert supporting Busan’s bid to host the World Expo,” RM said

“We’ve been looking forward to this Busan concert, but there were members who were especially excited for today’s concert,” V said, turning towards Jungkook and Jimin who were born and raised in Busan.

“Busan is my and Jimin’s home city, and I’m thrilled and happy to be spending time with so many Armys in Busan,” Jungkook said, referring to the group’s global fanbase, Army.

“It’s my joy and honour to be meeting you like this, being able to invite you to my hometown gives me a strange feeling,” Jimin said.

The talk session was cut shorter than usual, and the members returned to the set-list with Save Me, a song which they’d brought onstage in a long while.

Highlights included unit performances, with the vocalist members, Jin, Jimin, V and Jungkook, cooing softly into the ears with 00:00 (Zero O’Clock) and Butterfly, and three rappers, Suga, J-Hope and RM, ferociously spitting out through UGH! and BTS cyper PT. 3: Killer.

Changed into casual outfits, BTS gathered back onto the stage together to serve up some of its biggest hits, Dynamite, Boy With Luv and Butter. The bandmates were also joined in by fans during Boy With Luv, and J-Hope responded to the sing-along by making a heart shape with his arms.

“We couldn’t miss out on this one while we’re holding a gig in Busan,” Jimin said as the band kicked into their 2015 song Ma City which they were performing live during a concert for their first time.

Running at full throttle, the boys notched up the heat further with more of their quintessential hits Dope and Fire, before hitting the night’s climax with Idol where several dozen dancers surrounded the boys as they jumped around more fervently than ever.

The night’s mood took a different turn with Young Forever, one of the act’s most beloved ballad tracks from the septet. Fans then began to sing-along For Youth without BTS, and the members picked up the song where the fans left off.

The sadness that the show was nearing its end hung heavy in the air as the members shared their last few words.

“I’ve really missed this moment. I’ve missed the six members while going solo. I think I’m the type of person that gets energetic when I’m with them. That’s why the emotions hit me while I was preparing for the concert,” J-Hope said.

“I want to talk about future,” J-Hope continued. “Trust is what we need now. Both Armys and us members, we need to draw our future together upon trust for each other.”

Jimin, who was gifted with a birthday chant from fans and members, said, “I didn’t used to, but these days I’m becoming curious about future. I’m looking forward to 10 years later, and rather than being scared, I actually think I’ll be happy,” and added, “It’s only been the teaser until now, and we’ll go 30, 40 more years from now.”

It was a night of surprises, and the biggest one came with Jin who announced his solo debut soon.

“Following J-Hope, I’m dropping my album next. It’s not something big but a single. I was able to come in touch with someone I had liked very much and will be releasing a song,” Jim said.

Jin, turning 30 next year, is set to start his mandatory military service within December.

“Many thoughts and feelings came through during the show. This is our last concert that we have in plan. I wanted to remember this moment for a long time as we don’t know when we will hold our next show,” Jin said.

“There were many ups and downs to this concert, but what is done is done. It’s important you take good memories from it,” Suga said. “Some people say this and that about BTS’ future, but we’ll stay here 20, 30 more years. Let’s grow old together.”