THE WASHINGTON POST – USD42.50. That was the grand total for the last dinner I ordered using one of my favorite food apps. Granted, that fed two. And, hungry, I had impulsively added an appetiser that, in retrospect, I really didn’t want.

That price tag made me stop short. Once again, I had shelled out serious money for so-so food that I could have easily made at home.

I love a good multistep cooking challenge – on a weekend, when I have no pressing errands. During the week? I want a recipe with no tricks up its sleeve.

Still, satisfying a weeknight takeout craving with an easy version of that dish can be a tall order. Quick-version recipes often fall flat, with too few ingredients, or they call for convenience products that drive up the cost and add unwanted sodium and sugar.

That’s where this Beef and Broccoli Stir-Fry recipe steps in. It is as straightforward as its name implies. The ingredients are easy to find. (I had most of the staples on hand but had to shop for the flank steak, broccoli, scallions and ginger.)

And, like most stir-fry recipes, it is adaptable. Don’t eat beef? Substitute in bite-size pieces of chicken or firm tofu cubes. Have frozen snow peas in the freezer? Add those in place of the carrots.

This take on the Chinese restaurant menu staple quickly made the repeat cycle in our house, after we discovered it in September at EatingWell.com. My two sisters make it. My nephew, too.

One reason we like it is that it’s healthier. Our Americanized versions of Chinese food can be calorie-packed with added sugar, sodium and carbs. The Eating Well editors say this version has about half of the calories of typical takeout beef and broccoli. (Another bonus of skipping the ordering app: I can’t add those tempting fried egg rolls with a click.)

The original recipe included two tablespoons of light brown sugar. I reduced that to one tablespoon, but urge you to keep that bit of sugar in the mix. It caramelises in the hot pan, complementing the ginger and garlic with a hint of sweetness that makes it all so yummy.

– If you love the fresh bite of ginger as much as I do, make it just as it is described below. If you don’t, cut the ginger to two teaspoons or even one.

– Keep the sodium down by using low-salt soy sauce and broth. Or use water rather than broth.

– I make this stir-fry with a bit of olive oil in large nonstick skillet, but use a high-smoke-point oil, such as grapeseed, if you prefer.

This version makes just enough sauce to coat the al dente vegetables and protein, so usually we eat it in a bowl with no rice. If you want to keep the carbs down, try serving the stir-fry over steamed riced cauliflower. By cutting the sugar and the carbs, this recipe, which serves four, comes in at about 360 calories per serving.

30 minutes, 4 servings. This 30-minute supper results in a healthier version of the popular takeout dish.

One pound broccoli, cut into florets (about six cups)

One medium carrot, cut into 1-inch matchsticks (about 1/2 cup)

1/2 cup thinly sliced scallions (about 3 to 4), plus more for garnish

Steps: In a small bowl, whisk together the soy sauce, broth or water, 1 tablespoon cornstarch and the brown sugar until combined.

Cut the flank steak with the grain into two-inch-wide pieces, then slice against the grain into 1/8-inch-thick strips. Place the steak on a large plate and sprinkle with the remaining one tablespoon cornstarch. Toss to coat.

In a large flat-bottomed wok, or nonstick or well-seasoned cast-iron skillet over medium-high heat. Heat two tablespoons of the oil until shimmering but not smoking. Add the steak and cook, stirring frequently, until browned, about four minutes. Transfer the steak to a plate.

Stir in the scallions, garlic and ginger. Cook, stirring, just until fragrant, about 30 seconds. Whisk the soy sauce mixture again. Reduce the heat to medium and add the soy mixture and beef to the pan. Cook until the sauce thickens, about a minute.

Serve over cooked brown rice or with steamed riced cauliflower and garnish with toasted sesame seeds and additional scallions, if desired.

Storage: Store the cooled stir-fry in an airtight container in the refrigerator for up to 3 days. 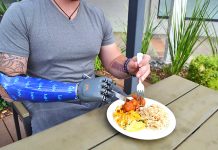 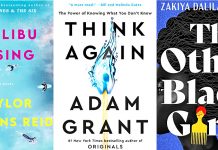 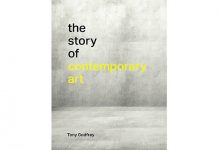