SHARM EL-SHEIKH, EGYPT (AP) – The world is getting hotter and more crowded and the two issues are connected, but not quite as much as people might think, experts say.

Yesterday somewhere a baby will be born that will be the globe’s eight billionth person, according to a projection by the United Nations (UN) and other experts. The Earth has warmed almost 0.9 degrees Celsius since the world hit the four billion mark in 1974.

Climate and population is a touchy subject for scientists and officials.

While more people consuming energy, mostly from the burning of fossil fuels, is warming the planet, the key issue isn’t the number of people as much as how a small fraction of those people are causing way more than their share of carbon pollution, several climate and population experts told The Associated Press.

“But I think most importantly, we have an overconsumption issue.”

And because of that the eight billionth child born will “not have what we had … because there’s not enough resources”, she said. 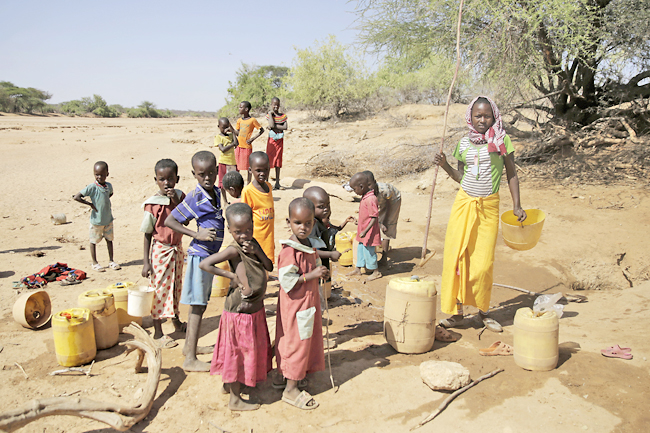 The average Canadian, Saudi and Australian put out more than 10 times the carbon dioxide into the air though their daily living than the average Pakistani, where one-third of the nation was flooded in a climate change worsened event. And in Qatar the per capita emissions is 20 times Pakistan’s, according to the World Bank.

“The question is not about population but rather about consumption patterns,” said climate scientist Bill Hare of Climate Analytics. “So it’s best to look at the major northern emitters to begin with.”

Climate Interactive, a group of scientists who run intricate computer simulations that can be tweaked to see what factors matter the most in fighting climate change, looked at the difference population makes. It found it made a small contribution compared to other factors, like economics.

Comparing two United Nations population projections scenarios of 8.8 billion people and 10.4 billion people, Climate Interactive’s Drew Jones found only a 0.2 degree Celsius difference. But the difference between no price or tax on carbon and USD100 a tonne was 0.7 degrees Celsius. Hare said there is more than a tinge of racism in the myth that overpopulation is the major issue behind climate change.

“One of the biggest arguments that I hear almost exclusively from men in high-income countries is that, ‘Oh, it’s just a population problem,’” The Nature Conservancy Chief Scientist Katharine Hayhoe said. “Nothing could be further from the truth.”

“The 50 per cent poorest people in the world are historically responsible for seven per cent of heat trapping gas emissions,” Hayhoe said. “Yet when you look at which countries are bearing the brunt of the impacts from climate change, countries like Malawi, Mozambique, Senegal, Afghanistan topped the list.”

And even within countries, it’s the wealthiest who cause more of the carbon pollution, Hare said. Overall, he said, “80 per cent of the population, the global population, emits a small fraction of emissions”.

The world’s population is growing mostly in sub-Saharan Africa and South Asia “and they’re contributing the least to man-made climate change”, said project coordinator at the Berlin Institute for Population and Development Colette Rose.

Eight nations, five in Africa, three in Asia, are going to have at least half of the population growth between now and 2050, Rose said. They are Egypt, Ethiopia, Tanzania, Nigeria, the Democratic Republic of Congo, Pakistan, India and the Philippines.

Worldwide population growth has substantially slowed, will likely peak sometime this century, and is now down to growing less than one per cent a year, Rose said. But carbon emissions are growing faster, at one per cent more this year than 2021.

For environmental advocacy groups and officials the issue of population and climate has caused problems. “Population is an issue that no one has wanted to touch from the very beginning. Too politically sensitive,” a climate historian from the University of Cambridge in England Joanna Depledge, said in an e-mail.

“There are many dimensions, notably in relation to religion and accusations of racism – population growth is mostly concentrated in non-white populations, of course”.

For a long time, the Sierra Club had promoted efforts to try to control the world population, until a couple decades ago, when the environmental group looked harder at the issue and broke down the numbers, said the group’s president, Ramon Cruz. They found the problems were more overconsumption and fossil fuel use and those problems would be the same “at six billion, seven billion or eight billion” people, he said.

While most environmental groups try to avoid the issue, 11 years ago, when the world hit 7 billion people, the Center for Biological Diversity made special issue condoms with population and environmental messages such as “Wrap with care, save the polar bear.”